The allure of Reality TV


Does anyone remember the "Balloon Boy" hoopla a couple of years ago? It seems like the allure of becoming a reality TV star causes people to do crazy things. Political analyst Andy Ostroy summed up so-called Reality Television quite nicely:

"Reality television is a stain on our society and an insult to culture. It's dumbed-down television at its worst, lowest common-denominator."

Most of the time "Reality TV" is an oxymoron. There is little reality in reality TV. Operation Repo is a dramatization of repos, not actual repos. The chefs in "Iron Chef America" know the ingredients beforehand (I don't care I still love this show). "The Biggest Loser" contestants put their lives at risk by severely restricting calorie intake and intentionally dehydrate to manipulate weight loss numbers. Thank MTV and The Real World for turning a good idea and degrading it into Jerry Springer-style drama.

Despite all this stupidity and asininity, Reality TV is still in high demand. Given the fear-mongering surrounding people listed on the public sex offender registry, it comes as no surprise a few individuals of credible sanity have stepped up to fill a perceived need for pseudo-reality television:

Judy Cornett: By far, Cornett is the worst person given any degree of credibility. Cornett has been on national television and is seen by many as a sort of expert in the field. I see her as at best an armchair quarterback with limited knowledge and an obvious bias. Like many others who decided to exploit their personal tragedies into a business venture, Cornett has forsaken all to win fame even at the expense of her son, who is now serving 25 years in prison for a violent crime. According to Cornett herself, there is a book deal, a motion picture, and a reality show coming. I wonder if any of these ventures will include her son's arrest for attempted murder and aggravated assault. Just remember where her proceeds are going to-- the criminal defense of a man who robbed and shot two people. 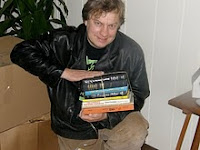 John Hoff (a.k.a., "Johnny Northside"): John Hoff is not the first local crime blogger featured here-- after all, we have featured other mentally deficient wannabe crimebloggers Rob Taylor and "Shoalanda" on this very site. So John Hoff thinks a snazzy nickname and a big mouth will net him a reality show. He's taking it one step further by actually filming promos and making a website for his reality show (hXXp://www.evilpinkpony.com/). If his movie actually becomes successful, I'm sure it will all be taken by the various lawsuits filed against him over the past few months, which included Hoff intentionally dodging court process servers. Ironic, huh?

Barbara Farris: Crazy vigilante Barbara Farris is aggressively pimping her own reality show, which, ironically enough, led to a brush with the law. Like Hoff, Farris has been pimping a self-created project, mostly on YouTube. The YouTube campaign is laughable as Farris aggressively screens critical comments and disabled ratings after getting dozens of Thumbs Down ratings for her pathetic videos.


Has anyone noticed a little something about the three stooges here? There is a blatant disregard for the law, aside from the harassment. Cornett justifies her son's violent crime and had the audacity to ask her supporters to pay for his appeal. Hoff posted the residences of registered persons in Minnesota (which is illegal), dodged process servers, and bragged about it. Farris has multiple brushes with the law. They harass former offenders, of course, which would be illegal if it was anyone else. It truly is amazing what people will do for the sake of being a reality star. What's next? Cornett on Dancing with the Stars? Hoff as WWE Champion like that other worthless reality show clown The Miz? But most likely, we'll see Farris on Cops-- as an arrestee!
Posted by oncefallendotcom at 3/06/2011 09:00:00 PM 14 comments: