hy·per·bo·le   [hahy-pur-buh-lee]
noun Rhetoric .
1.
obvious and intentional exaggeration.
2.
an extravagant statement or figure of speech not intended to be taken literally, as “to wait an eternity.”

Today's showcase is hyperbole. Hyperbole is an exaggerated statement. You see a lot of that on the AZU website or during those rare times the trolls venture from their little nests. See the following statement from Stitches 77, the queen of cognitive distortions:

AZU intentionally looks for the numbers that look the largest and run with it, despite having no references, only exaggerations. That is why armchair vigilantes cannot understand the complexity of statistics. Stats are college level courses. AZU consists of bored housewives with no credentials and no education. Sadly, so are many other so-called child victim advocates.

WHO claims 60 MILLION survivors? Besides AZU, just a handful of other misguided groups. Thankfully most people understand that as bullshit. When was AZU ever quoted as a legitimate reference? Answer: NEVER.

AZU hasn't been discussed here much any more. Quite frankly, they are no longer relevant, though they flounder with the same playbook like a noob Madden player who picks the Hail Mary pass over and over again. But they make plenty of good examples for studying logical fallacies.

Today's lesson is known as the "Weak Analogy:"

AZU argues because so-called "hard-core pedophile activists" and sex offender reformists share some common goals then they must be one and the same. The Black Panthers and Martin Luther King both shared some common goals like the eradication of discrimination against African-Americans, therefore MLK was a militant racist thug who believed in killing to get what he wants, right? According to AZU logic, the answer would be yes.

It is entirely possible for someone with ulterior motives to join a group contrary to their status in life. For example, Absolute Zero United has two repeat sex offenders in their dwindling group.

More on this fallacy below.

Definition: Many arguments rely on an analogy between two or more objects, ideas, or situations. If the two things that are being compared aren't really alike in the relevant respects, the analogy is a weak one, and the argument that relies on it commits the fallacy of weak analogy.
Example: "Guns are like hammers—they're both tools with metal parts that could be used to kill someone. And yet it would be ridiculous to restrict the purchase of hammers—so restrictions on purchasing guns are equally ridiculous." While guns and hammers do share certain features, these features (having metal parts, being tools, and being potentially useful for violence) are not the ones at stake in deciding whether to restrict guns. Rather, we restrict guns because they can easily be used to kill large numbers of people at a distance. This is a feature hammers do not share—it would be hard to kill a crowd with a hammer. Thus, the analogy is weak, and so is the argument based on it.
If you think about it, you can make an analogy of some kind between almost any two things in the world: "My paper is like a mud puddle because they both get bigger when it rains (I work more when I'm stuck inside) and they're both kind of murky." So the mere fact that you can draw an analogy between two things doesn't prove much, by itself.
Tip: Identify what properties are important to the claim you're making, and see whether the two things you're comparing both share those properties.
Posted by oncefallendotcom at 4/25/2012 08:53:00 PM 5 comments:

If these groups do not advocate vigilante violence, then why...

Just a thought-- If these groups do not advocate vigilante violence, then why do they use so many violent images in their logos? 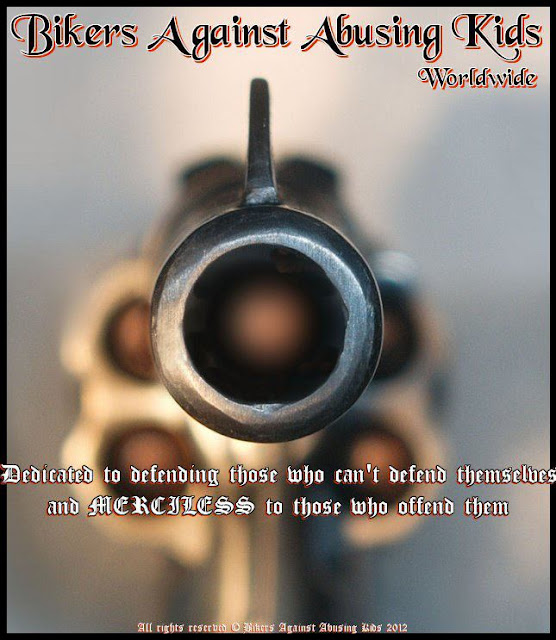 Email ThisBlogThis!Share to TwitterShare to FacebookShare to Pinterest
Labels: BACA, Bikers Against Abusing Kids BAAK, No Peace For Predators, Violence

These stories are getting more common. Pretty soon it will be an every day occurrence. It is beyond time to abolish the registry and force better media standards.

Updated: Saturday, 31 Mar 2012, 5:00 PM EDTPublished : Saturday, 31 Mar 2012, 5:00 PM EDT
READING, Pa. ( - Police in eastern Pennsylvania say a pair of neighbors viciously assaulted a man out for an evening walk in the mistaken belief he was stalking children.
Exeter Township police say the men charged Friday had overreacted to a Facebook post about a suspected child predator in the area.
Police say the 58-year-old victim was out for a walk on March 21 when he was violently confronted by Dennis Sinnott.
Authorities say neighbor Mark Eldredge saw the encounter and joined the attack. Eldredge had been driving around to distribute flyers about the alleged child stalker.
Police have since determined the suspected predator is actually a 76-year-old man who scavenges trash.
Eldredge faces charges including assault. Sinnott faces charges including harassment. Neither could be reached for comment.
Posted by oncefallendotcom at 4/02/2012 10:27:00 AM No comments: