It is too long to repost here, but below is a link to an awesome article on the androgeny of the Perverted Justice/ Wikisposure movement:

Learning to hate what you have in the past is typically a part of the treatment process. In 12 steps, there is a point where you learn the harm you caused and atone for it. Of course, like any program, it can be taken to the extreme. It is not uncommon for excommunicated members of a group or someone who left a group to form (or join) a rival organization and bash the old organization. But in the case of Static and Metanoid, they are a bit of both.

Static has been a subject here on many occasions, and his self-loathing has been analyzed already. We're already well aware of Static's reasons for kissing AZU's collective asses:

But Metanoid is a different subject. Metanoid, former owner of Sex Offender Alliance, a treatment [sic] site brought down by Absolute Zero United last year, and current ownder of the site www.sorcomm.net, another pseudo-treatment site. Metanoid still believes that we should bow down to AZU and accept their abuse as evidenced by his recent comments at AZU: 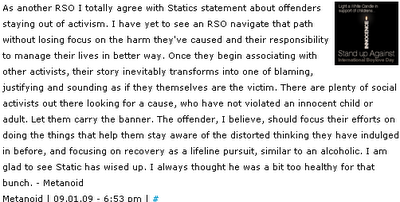 So according to Metanoid, if we speak out against laws that are designed to punish sex offenders beyond their sentences and destroy our families, we are somehow "victim bashing" or denying our responsibilities. We should "remain silent," and never fight back. Sound familiar? It sounds just like AZU! Static and Metanoid have a lot in common. Both are Tier 3 offenders who believe somehow the way to atone for their crimes is to bash and belittle others, many of who are NOT Tier 3 sex offenders like they are. If they want to bend over and let society fuck them in the ass that's their perogative, but to focus their angst against others rather than focus on their own shortcomings is unhealthy. It is called "projection." It is a standard cognitive distortion. By focusing on someone else who they perceive is "worse" than them, they minimize their own transgressions. And AZU provides the self-loathers gladly act as enablers. After all, any enemy of their enemies are their friends.

I found it funny Metanoid will go to the one place that advocates rape and murder as an avenue for his own distorted brand of healing, but ironically, Metanerd offers this seemingly contradictory musing:

Here's a little truth for the self loathers. No one gives a damn whether you re-offend or not, nor cares whether you eat, sleep, or even live. AZU certainly wants you dead, though they enjoy the feel of your lips on their asses. But whether you like it or not, the very people you loathe are the ones trying to push for the very reforms you claim to advocate. Wake up and smell what you're shoveling!
Posted by oncefallendotcom at 9/22/2009 11:08:00 PM 2 comments: