WARNING RSO ACTIVISTS: Shaun Webb is the new T-Sand. Should I call him T-Shaun?

If there is a time I struggle with the idea of posting someone on this blog, it is when the troll is a Registered Citizen. Years ago, Clay Keys from Pensacola, aka "T-Sand," grew angry with the Anti-Registry Movement and started attacking activists and family members alike and teaming up with the likes of Absolute Zero United and Valerie "Valigator" Parkhurst. Ultimately, T-Sand reoffended and is sitting inside a Florida prison for a 15 year sentence. Unfortunately, that was a time my bleeding heart backfired, because I tried to give T-Sand a chance. Recently I've had to deal with a similar situation.

Shaun Webb is a registered citizen living in Michigan. He writes books (A Motion for Innocence, Behind the Brick, and Lost Youth) and hocks them on website like Amazon and attends book shows. He claims to be innocent, but he is currently convicted and listed publicly as a Tier 2. Shaun Webb first came approached me years ago, promoting his personal story. Now, I try to promote the works of those on the registry, even if their writing ability is a little lacking. In Shaun's case, there were glaring grammar and spelling errors, using the wrong word like "vial" (a container) instead of "vile" (something disgusting or bad). I didn't give it an Amazon review but on the insistence of fellow activists who I took at face value, I added it to my list of recommended reading.

I should have known something wasn't quite right with Shaun when a few weeks after he sent me an electronic copy of his first book, he contacted me saying he heard I was sharing his book with people without his permission. I don't appreciate anyone accusing me of crap I didn't do, and so I stopped communicating with him. A year or so later, he apologized so I gave him another chance.

Well, a couple of weeks ago, Shaun got upset over a trifling issue, a bad phone connection as the result of traveling while having a sinus infection. He blew up over a petty issue and TRYING to threaten me over the phone. So he eventually backed off for a week. As some of you might know, I've been extremely busy working on a number of issues and haven't been on the internet that much. Yet, Shaun sends a nasty email falsely accusing me of slamming his books. I had already explained to this paranoid fucker that no one can easily create multiple Amazon accounts, and up to this point, have never even had a Goodreads account. There were no new negative reviews in the week since Shaun decided to act like a douchecanal, so personally, the only place he could have received it was within his own mind. Once again, I was accused of things I did not do, from the same fat piece of shit that accused me of giving away free copies of his books, and I let him know how I felt about being falsely accused. He told me he would not bother me any more, but the next day, he sent harassing messages by text, claiming he was going to come to Cincinnati to beat my ass (something I hear from trolls all the time but never see actually happen).

Because Shaun Webb engaged in constant threats by phone and internet, as well as continuing to use my name and likeness to sell his lousy books, I removed my endorsements of his books from my website and Amazon, and posted a formal notice on my once Fallen blog that I no longer endorse, condone or support any of Shaun Webb's books.

Later, after I already warned him to stop further communication with me, he admits to being a "mole' for the other side:

Since Shaun Webb has revealed his true colors to me, and continuously bashes me on the internet, even quoting "Encyclopedia Dramatica" as a valid source, I have been left with no other option than to feature Shaun Webb on this blog.

I have asked Shaun Webb repeatedly to cease further communication with me and to stop using my name and likeness to promote his work. I also strongly suggest to you never accept an offer from him to review his work, because if you say anything at all about his work except a glowing five-star review, he will harass you to the ends of the earth. He was banned from Goodreads for that very reason.

I guess even Val won't accept her new minion, by the way: 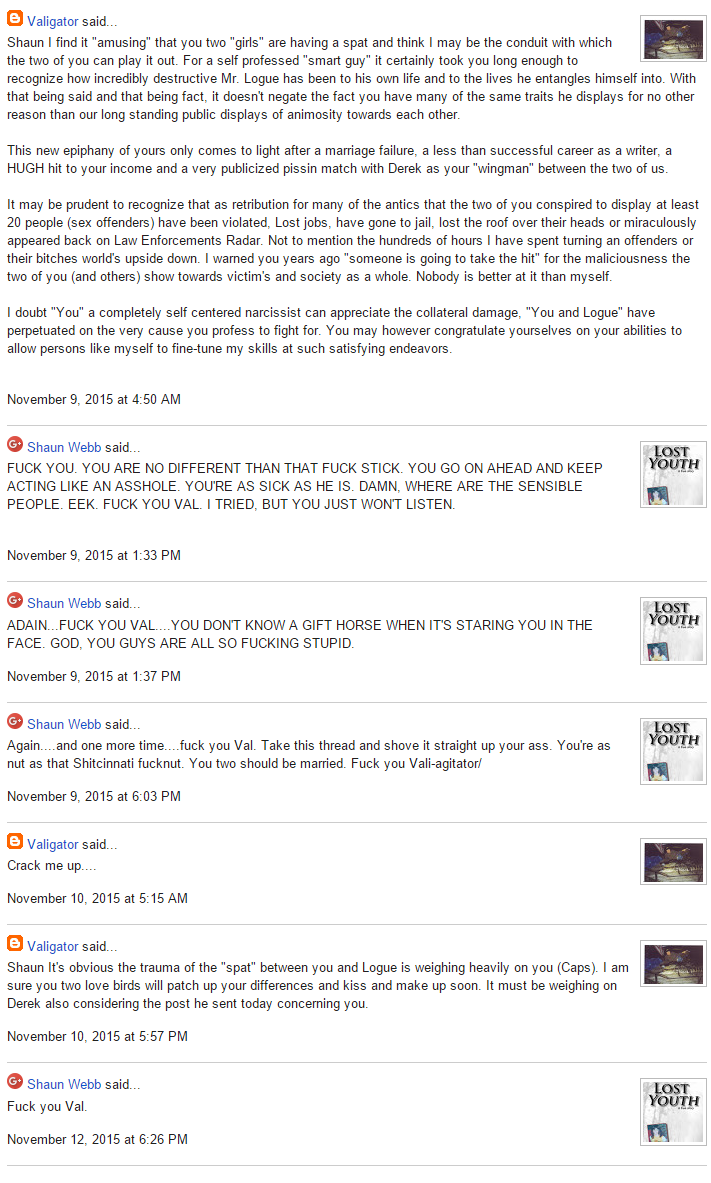 Shaun Webb has even stooped so low as to pretend to be a female reviewer on my book on Amazon. Coincidentally, T-Sand also had a habit of harassing folks while creating female profiles:

Shaun does such a lousy job of covering his tracks. I guess somehow I was supposed to be fooled by "Heather" who coincidentally has only reviewed Shaun Webb's books on Amazon: 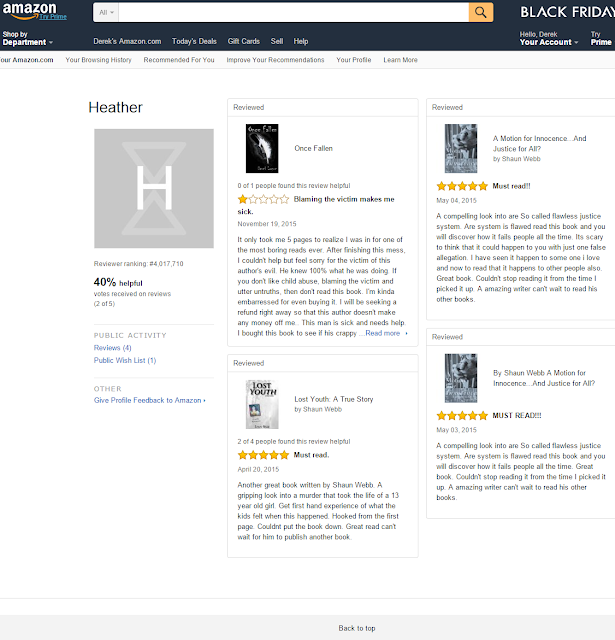 And on Goodreads as "Marcie:" 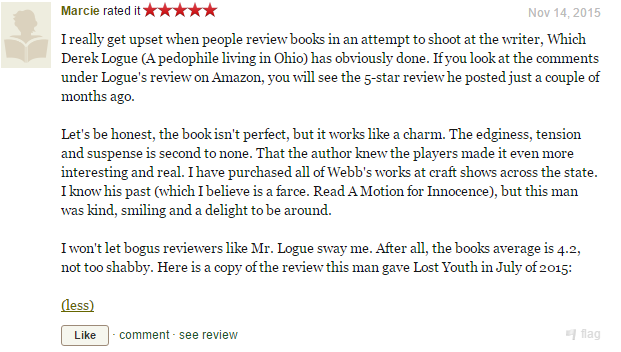 Here he is attacking me once again on Goodreads, again quoting the same lame attacks.

He is trying to hide his recent attacks against me from other RSO activists in hopes you won't catch on to his behavior, but I have caught him slamming me numerous times. Here is his personal blog where he posted the same crap before he took it down (only after I filed a report against him):

The bottom line-- DO NOT accept the offer of a free book in return for a review, or you will regret it as I have. If he is willing to call someone who actually helped promote his sorry ass the P word and go crying to Valerie Parkhurst, then he'll do the same to you. DO NOT trust this fat piece of shit for anything.
Posted by oncefallendotcom at 11/29/2015 03:58:00 AM 2 comments:

Apparently there is yet another scumbag wannabe vigilante group advocating the death penalty for those on the registry. This group is called "Sex offender Updates," and they are trying to push state-sponsored murder of registered citizens.

At the moment, it is unclear who runs this shitty website. One of the cardinal rules for being an online wannabe vigilante, after all, is to hide in an anonymous hole like a coward. And any organization citing any of the other groups listed here, like Absolute Zero United or Evil Unveiled, is obviously an invalid resource. And guess what? Their address, Sex Offender Updates, 4733 Torrance Blvd., Suite 712, Torrance, CA 90503-4100, is a private PO Box rental company.

To that effort, they lie about recidivism rates using the same tired myths that I have debunked years ago,

So anyways, this group wants to repeal the US Supreme Court decision of Kennedy v. Louisiana, allowing execution of people convicted of sex crimes. Thankfully this has only gotten 178 shares. So much for this being unanimous. The only thing I can agree on is that Justice Kennedy used faulty reasoning by relying on what he felt was a "general consensus," but unlike Sex Offender Updates, I feel the problem was Kennedy relied on the consensus rather than the Constitution.

To my knowledge, this Sex Offender Updates site isn't actively targeting anyone for now (though they have a few anti-RSOL articles up that are basically copy-paste jobs of old Evil Unveiled and AZU bullshit). However, I must raise awareness on this site because they are promoting violence against registered citizens: 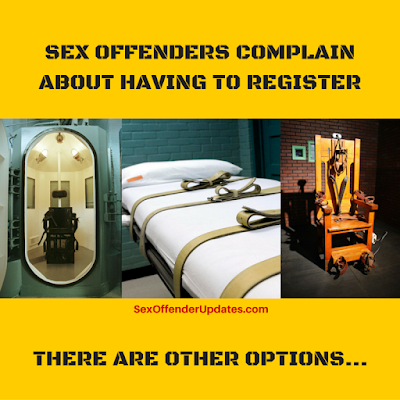