Looks like Offendex/ Chuck Rodrick is at it again. Has he paid that $3.4 Million he owed yet?

When we last discussed Chuck Rodrick (AKA Sucky Chucky) and his Offendex extortion scam, he has busy trying to hide $3.4 million dollars in money he scammed from folks. He obviously hasn't learned his lesson. He is still filing lawsuits from a UPS store address (34522 N. Scottsdale Rd., #120-467, Scottsdale, AZ 85266). I guess he's too much of a pussy to show his face in public.

I guess he's hoping to start some new shit with folks so he's finally gotten around to targeting me. But then he goes and quotes Valerie Parkhurst as a credible source. What a joke. So now he is running two MORE scamming sites, BarComplaint.com and SexOffenderNewswire.com, both sites looking like it was created by a kid.

From what I have heard, he's hiding from the Feds. I don't doubt it. I'm still waiting for the Offendextortion site to update us on Chuck and his run from justice. There is also another

My guess is he is just wanting someone to beat his ass. Luckily for him, I'm busy dealing with another con artist to deal with him so I'll just keep this one on the backburner for now. But i'm not done with him or his cronies threatening me anonymously. 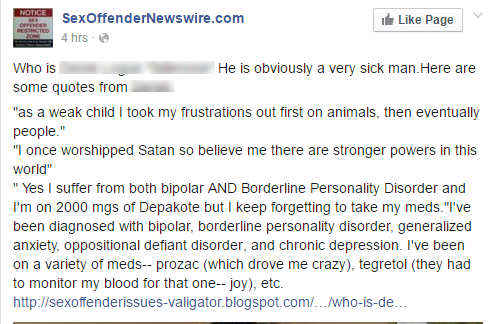 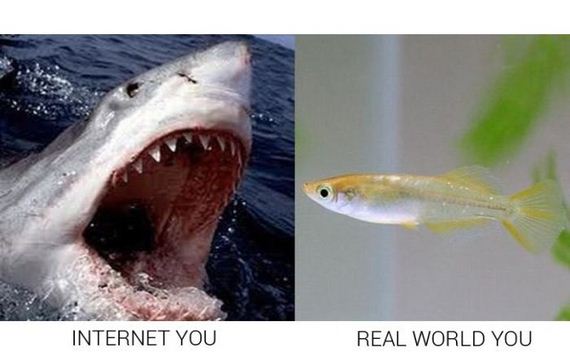 As y'all may know, I've been part of numerous demonstrations over the years, and at times, we deal with real life wannabe vigilantes. In 2007, our protest brought out BACA, Judy Cornett, and Absolute Zero United; last year, BAA and FDLE formed a wall between us and the Book family; and last week, I was slapped with a frivolous lawsuit by Parents For Megan's Law.

But in response to a Newsday (Suffolk Co. News) piece, a woman going by the FB name "Eileen Kennedy Panico" and a Youtube channel of the same name [apparently of  1869 Ave Louis Kossuth, Ronkonkoma, NY, phone #  (631) 738-1372 according to THIS SITE] made some nasty remarks about me on the web. I'm used to it by now so it never fazes me. However, I figured I'd share it here since I vaguely remember this woman. 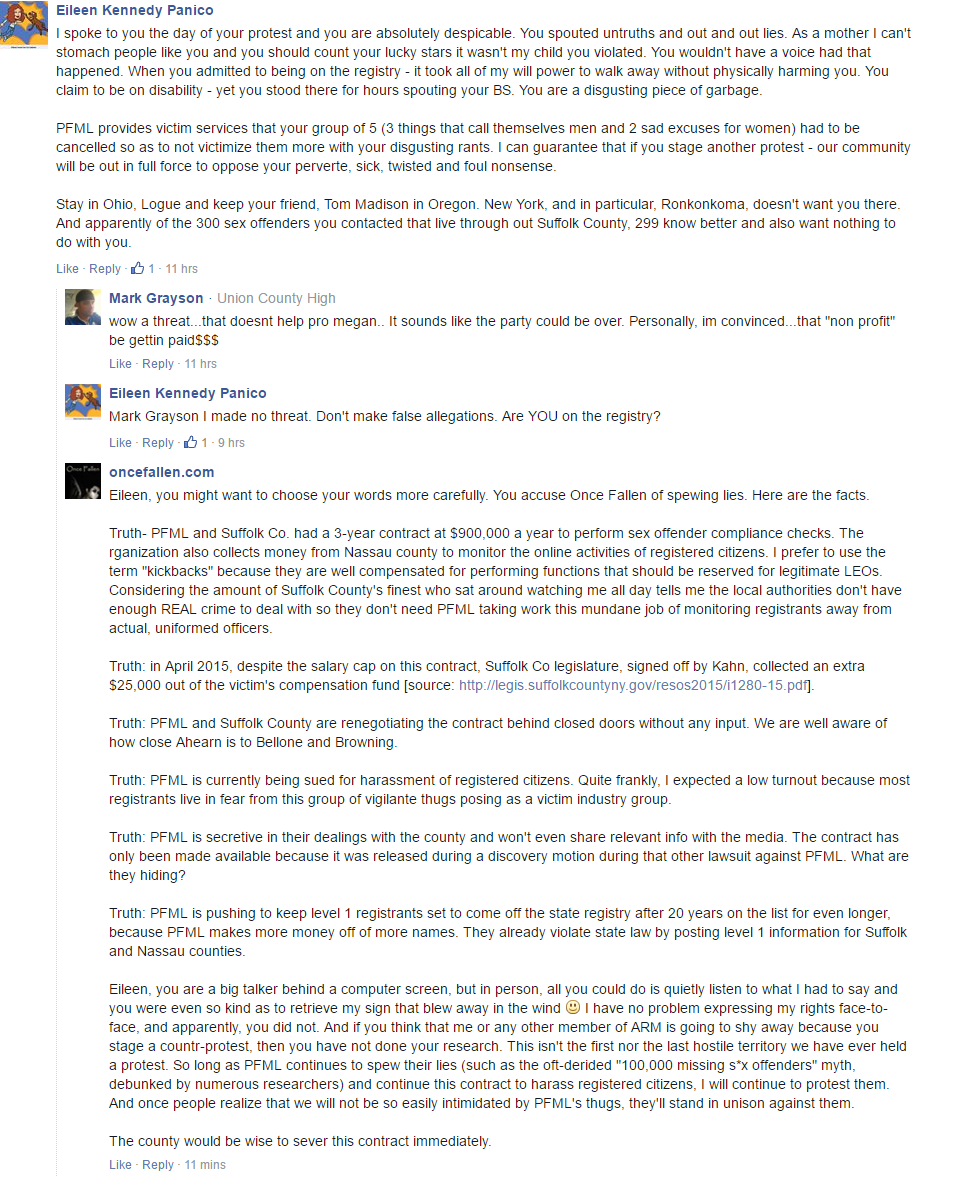 I spoke to you the day of your protest and you are absolutely despicable. You spouted untruths and out and out lies. As a mother I can't stomach people like you and you should count your lucky stars it wasn't my child you violated. You wouldn't have a voice had that happened. When you admitted to being on the registry - it took all of my will power to walk away without physically harming you. You claim to be on disability - yet you stood there for hours spouting your BS. You are a disgusting piece of garbage. 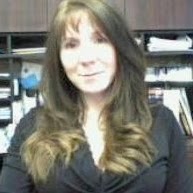 PFML provides victim services that your group of 5 (3 things that call themselves men and 2 sad excuses for women) had to be cancelled so as to not victimize them more with your disgusting rants. I can guarantee that if you stage another protest - our community will be out in full force to oppose your perverte, sick, twisted and foul nonsense.

Stay in Ohio, Logue and keep your friend, Tom Madison in Oregon. New York, and in particular, Ronkonkoma, doesn't want you there. And apparently of the 300 sex offenders you contacted that live through out Suffolk County, 299 know better and also want nothing to do with you.

So anyways, this Eileen lady is typical of internet trolls when met in real life. Allow me to tell you how this encounter REALLY went down.

About 9:30 am, not long after my arrival (and before the other six protesters arrived) some lady (now assumed to be Eileen) was taking pictures and held a notepad, presenting herself as if she was a reporter. I thought nothing about it and she asked me some mundane questions about why we are protesting. It was a windy morning, and one of our signs blew into the parking lot, and I asked her to retrieve it for me, and she did. She thanked me for speaking, then left.

So all this big gangster talk on the internet is laughable. It took all she had not to physically harm me? ROFLMAO! What a joke. First, she would have been arrested. Second, there is no way this person could hurt me short of a long distance projectile. She couldn't even call me a "disgusting piece of garbage" to my face, despite the fact I was engaging in a peaceful protest with so few demonstrators, right?

I love the other stupid comment she made when someone else pointed out her online threat:

****
wow a threat...that doesnt help pro megan.. It sounds like the party could be over. Personally, im convinced...that "non profit" be gettin paid$$$
Like · Reply · 1 hr

Eileen Kennedy Panico
*** I made no threat. Don't make false allegations. Are YOU on the registry?

It is hypocritical for her to bash me for "making false allegations" of PFML while you assume this person is a sex offender for disagreeing with her.

I wrote Eileen a little song. Sing it with me: