"Creep Catchers" wannabe vigilante nearly gets run over. Too bad the driver missed

Police are warning a vigilante group to stop ambushing alleged pedophiles and shaming them online, after an attempted sting went awry in Surrey, B.C.
A local chapter of the self-proclaimed "Creep Catchers" was recording video of someone they claimed had arranged to meet a purported teenager for underage sex, when the suspect panicked and crashed his car into a parked truck. The driver also narrowly missed injuring the vigilante, who was leaning into the car's open passenger door when it drove off. The vigilante had been posing as a 14-year-old boy, and was recording the incident on his cellphone.
The suspect became spooked when he noticed the vigilante recording their encounter on a phone, as shown in a clip posted online.
"He got scared and tried to take off, hit a parked truck, (and) tried to run me over," said Patrick LaForge, one of the “Creep Catchers” involved in the sting.
Surrey RCMP condemned the incident in a statement, pointing out that vigilantism does not help them bring potential sexual predators to justice.
"Vigilantism is a risk to the safety of all those involved including victims or potential victims, the alleged suspects, and/or the safety of those persons intent on broadcasting the suspected crime," Cpl. Scotty Schumann said in the statement.
Police are describing the case as a "motor vehicle incident," and have not indicated whether any charges will be laid.
The Creep Catcher movement has spread to several cities in Canada over the last year, with most of the takedowns occurring in Western Canadian cities. Vigilantes with the group pose as underage teens online, in order to lure potential pedophiles into meeting up in person. The Creep Catchers then record their in-person meetup with the suspect and post the video online, along with the online chat history of their "flirtations," in order to publicly shame the individual.
Police in Edmonton issued a warning to the city's Creep Catchers last April, saying that their activities are dangerous and potentially disruptive to the efforts of police. Vancouver police also slammed the group's activities in February.
Creep Catchers founder Dawson Raymond says the group's mission is to keep children safe. "Men and women, young and old, rich and poor; these creeps seem like everyday people but they just ACTED on a dark secret within them," he writes on the website. "Let's hope I can scare a little sense into them so next time they want to meet a 13-year-old for sex, they'll REMEMBER MY FACE and think twice!"
The vigilante movement uses tactics similar to those employed by the long-running U.S. television program, "To Catch a Predator," in which host Chris Hansen would ambush men seeking to meet up with young girls for sex.
Posted by oncefallendotcom at 8/18/2016 08:11:00 AM 14 comments:

Alaskan Vigilante THUG and career criminal Jason Vuckovich attacked three registrants. So why did it take so long to get a Mugshot out? 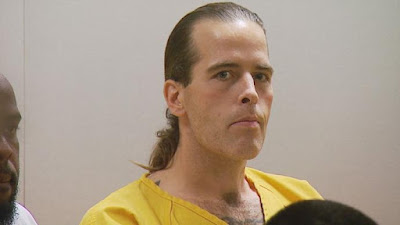 That's a good question. It took a couple of weeks to get one out. He attempted to kill 3 folks but at most he's facing 30 years. He needs life without parole.

A man charged with using a hammer to attack a registered sex offender in Anchorage last month now faces additional charges for assaulting two other men listed on the public sex-offender registry.

According to a recent bail memorandum, Jason Vukovich, a self-styled "avenging angel" according to one of the victims, carried a notebook with a list of names, including Charles Albee, Andres Barbosa and Wesley Demarest. Over five days in June, he entered the homes of the three men, uninvited, and hit them, sometimes with his fists and sometimes with a hammer. He also stole from them, said the bail memorandum signed by assistant district attorney Patrick McKay.

Vukovich told police that he targeted his victims based on their listings on Alaska's sex-offender registry, the memo says. The online registry includes their home addresses, employer addresses and convictions.

Police found Vukovich and his notebook inside of a gray Honda Civic early June 29 shortly after police said he attacked Demarest with a hammer. Vukovich was arrested and taken to the Anchorage jail where he remained Wednesday, nearly a month later. He faces 18 charges for assault, robbery, burglary and theft.

In an interview earlier this month, Demarest said his attacker called himself the "avenging angel" for children hurt by abusers.

A letter from jail

Vukovich's attorney declined to comment on the case earlier this month, but in a two-page letter signed in pencil and sent from jail a week ago, Vukovich said he himself suffered physical and sexual abuse at the hands of his adoptive father.

Vukovich wrote in the letter that he could not talk about the current charges he faced, but expressed shame and regret about some of his past behavior. He wrote about his father who adopted, beat and molested him as a child.

"After this adoption took place, I was beaten with 2x4s custom made for the purpose of inflicting pain or belts etc.," he wrote. "Also, I suffered through repeated molestation at his hands."

Vukovich identified his adoptive father as Larry Lee Fulton. A 1989 Anchorage Daily News article said a Larry Lee Fulton was found guilty of second-degree abuse of a minor but received only a three-year suspended sentence from then-Superior Court Judge Karl Johnstone. Johnstone ordered Fulton to stay away from his victim, who was unnamed. Vukovich wrote that Fulton "returned immediately to the home and isolated me out in Wasilla."

A court document filed by Vukovich's attorney in an earlier criminal case also details his childhood of abuse and molestation by "Mr. Fulton."

"What I can say at this time is that after being physically and mentally abused by a predator, my life was forever changed," Vukovich wrote in the letter. "I literally gave my own existence no value or concern. I became a thief and a liar and went on to make many poor choices throughout my life."

In closing his letter, Vukovich wrote that children "should be able to play in the streets and parks and go to church without the threat of pedophiles lingering around them."

"My own heart may have been broken long ago," he wrote, "but with all my being I support every child in pursuit of their dreams."

In asking for strict bail conditions this week, the prosecutor noted that Vukovich has been convicted for a string of charges including fraud, theft, possession of a controlled substance and assault. Vukovich most recently got out of jail on June 24. Police say he assaulted Albee the next day.

About 9:30 a.m. June 25, Albee answered a knock on his door and an unknown man walked in, according to the bail memorandum against Vukovich. The intruder told Albee to sit on his bed and slapped him in the face multiple times. He said he was there because Albee was a registered sex offender. Albee said the man had a notebook with a list of names, the bail memorandum says.

Albee was convicted in 2003 of second-degree abuse of a minor, according to the registry.

The intruder stole items from Albee's home and left, the prosecutor's memo says. Albee described him as a white man with shoulder-length dark hair who wore a black leather jacket and baseball cap, according to the memo.

Within 48 hours, Barbosa answered a knock on his door in South Anchorage about 4 a.m. on June 27. A white man in a dark jacket and baseball cap asked if his name was "Barbosa." When he said yes, the man threatened him with a hammer. The man entered his home with two women, the memo says.

"The male made Barbosa sit in a chair and told him he was there because of Barbosa's crimes," the memo says. "The man called him a 'pedophile,' punched Barbosa in the face several times, threatened to 'bash in his dome' with the hammer, and stated that he was there to collect what Barbosa owed."

Barbosa was convicted of a charge brought in 2014 of possession of child pornography, according to the sex-offender registry. The charges against Vukovich say that Vukovich and one of the women stole several items from Barbosa's apartment, including his truck, while the other woman recorded it on her cellphone.

Then, on June 29 around 1 a.m., Demarest woke up to his roommate alerting him that someone had just smashed their Spenard home's window. A man with shoulder-length hair and a black leather jacket stood behind the roommate with a hammer, ordering him to leave, the memo says.

The man told Demarest to get down on his knees and lie on the bed. When Demarest didn't comply, the man hit him in the head with a hammer, knocking him unconscious. He stole several items, including a laptop computer, and left.

In 2006, Demarest was convicted of attempted sexual abuse of a minor.

Demarest woke up in a pool of blood on June 29. His roommate had called 911. Soon, police found Vukovich nearby, in his car with another person, a notebook, a hammer and several stolen items. The names of Albee, Barbosa and Demarest were all listed in the notebook, the memo says.

Vukovich's next court appearance is scheduled for Thursday afternoon.

Send Private Condolences | Send Sympathy Card
Valerie Parkhurst
Val Parkhurst, age 60, of Davie, FL passed away peacefully at her home on Wednesday, July 27, 2016 after a battle with a short illness. She was born on November 19, 1955 a daughter of Elsie and Ann Tolbert Morris. Val worked for years as a dental associate where she worked for Dr. George Galluzzo in Fort Lauderdale. She is survived by her son, Justin Collison of Jupiter, FL. Services will be planned privately for close friends and family.

Good fucking riddance. Interestingly, she died the day I was in Oakland protesting International Megan's Law. Maybe seeing us destroying IML sent her straight to hell.