U. of Washington targeted by Campus Feminist/ MeToo vigilantes through online vigilante website

Washington State already has a problem with vigilantes. Now this cancer has spread to the U. of Washington. I guess it will be a matter of time before someone gets sued for defamation.

Site features dozens of unsubstantiated allegations; take them ‘with a grain of salt,’ moderators say

A website allegedly run by University of Washington students allows individuals to publicly accuse people of sexual assault with no evidence.

The website, titled “Make them scared UW,” was first registered in November of last year but reportedly launched in late September of this year by University of Washington students, the Daily UW campus newspaper reports.

It appears that the list of accused rapists and sexual assault perpetrators has grown substantially on the site in recent weeks in the wake of the rape claims made against U.S. Supreme Court justice nominee Brett Kavanaugh.

Meanwhile, one student named on “Make them scared UW” told The College Fix that the allegation is false, that the University of Washington has dismissed the allegations against him as completely uncorroborated and cleared him of any wrongdoing.

Thus far, every person named on the list is male, and their names include the school they attend. Many listed on the site appear to be University of Washington students, but as apparent word of this site has spread, students from many other colleges are now listed, too.

The site does not employ any mechanisms to verify the truth of any accusations it publishes, and the website’s moderators attempt to protect themselves from liability or criticism by stating atop the list of the accused: “Please remember, just because a name is on this list does not mean the individual is guilty. All it means is that we have received an accusation against them.”

The moderators of the website did not respond to The College Fix‘s repeated requests for comment. The Fix sought to learn if the site’s moderators had any concerns about accusations being directed at innocent people, and whether or not the website has received any legal challenges for publishing unverified allegations.

According to the FAQ page of the website, “Make them scared UW” is a “communal rape list.”

It is “intended to be an online hub for anyone who wants to expose the names of their attackers and harassers, and to fill a gap left by inadequate treatment of these cases by formal institutions.”

“One of our site’s moderators will review your submission, verify your contact information, and after receiving your confirmation, publish the information you provided us (minus any personally identifying info) on the list page on our site,” the FAQ page tells individuals who wish to submit an accusation.

“We do not have the ability to determine whether any accused party is guilty or innocent of the accused acts, so take all names listed with a grain of salt,” the site’s front page states.

Via Facebook message, The College Fix managed to contact one student on the list, a young man who was identified as attending the University of Washington. The student denied having sexually assaulted his accuser.

“I was investigated by my school’s office and found that there was insufficient evidence of what she was accusing me of,” he told The Fix. He said the allegation stems from a night in which he and his accuser “both got pretty drunk,” after which he performed oral sex on her. After he attempted to initiate intercourse, his accuser said no, at which point he “backed off,” he said.

“This girl gave the investigator at my school literally everything, our facebook messages, our snapchat messages (she saved all of them), text messages, and even my reddit account and I was deemed to be so not a threat to her that the investigator didn’t even care if I was in the same class as her,” the student said. He said that he wasn’t even aware he was on the “Make Them Scared” list until The Fix contacted him.

Campus spokesman Victor Balta told The Fix that the school has not decided how to proceed on the issue.

“The contents of the website are very concerning, and the UW is committed to our work toward preventing sexual violence and sexual harassment, maintaining support and protections for anyone who experiences such violence, properly investigating and addressing allegations, and upholding due process,” Balta said via email.

Asked if the school was aware if the website is run by students at the University of Washington, Balta said: “We don’t know for certain.”

Asked if false allegations on the site made or posted by students or affiliates of the university would be treated as “harassment” under school policy, Balta said: “If the university received a complaint that an individual was being harassed or bullied by a student, we would investigate it in the same manner as we would any other case.” Balta reiterated that the university is uncertain if the site is run by students.

In an interview with the student newspaper The Daily UW, University of Washington School of Law associate professor Zahr Said said that the website moderators could face “considerable risks of a defamation lawsuit by anyone whose name they mention in connection with a criminal behavior or sexual assault that gives rise to civil liability.”

But the site’s moderators told The Daily: “We hope that anyone whose name was inaccurately posted on our site will let us know so we can remedy the situation. We’ve verified each claim to the best of our ability, and have not published any claims which we believed to be false.”

“The site’s domain name was registered Nov. 29, 2017, with additional security so as not to reveal the identity of the individual who registered it,” The Daily reported.
Posted by oncefallendotcom at 10/09/2018 10:32:00 PM No comments:

If the judge needed any proof of Curtis Hart's ill intent, all he had to do was look at the harassment the OnceFallen.com received at the hands of Hart and his cohorts. In the past few hours, a number of folks flooded the OnceFallen FB page with harassing comments. This goes to show that the state of  Washington does not enforce the ban on the misuse of registry info to harass registered persons. 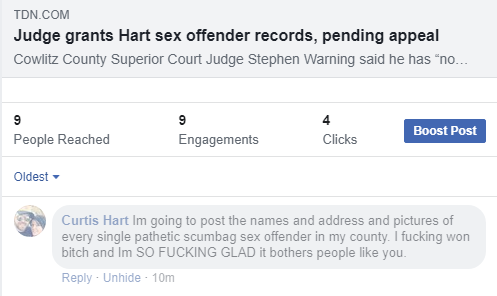 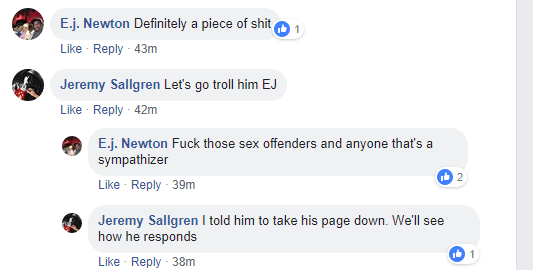 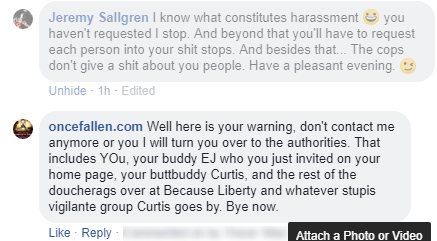 It should be noted that The Daily News has seemingly supported vile vigilante activity. They are strongly connected to another Washington vigilante, Donna Zink, and helped promote a similar fight Zink had done. They are censoring certain posts made by those critical of Curtis Hart.

Cowlitz County Superior Court Judge Stephen Warning said he has “no doubt in (his) mind” that Curtis Hart will make “childish, irresponsible, vindictive and immature use” of records of all level 1 sex offenders in Cowlitz County.

But, “reluctantly,” Warning concluded Wednesday that the law requires that Hart should get them.

“Sometimes the law is an ass,” Warning said, “and Mr. Hart is entitled to his records.”

Hart won’t get the records yet, though. Warning will decide Oct. 10 what should or should not be withheld from the request. In the meantime, attorneys representing some of the offenders will be able to appeal the decision — which attorneys indicated is a near certainty.

At the very least, about 200 of the county’s 570 level 1 offenders committed their crimes while they were juvenile, and their names will not be released, according to the county sheriff’s office.

“I very much think of this as a First Amendment battle,” Hart said after Warning’s ruling.

He has said that sex predators deserve scorn and that he doubts many of the offenders are capable of reform, even though level 1 offenders are considered the least likely to reoffend. Hart has acted as a self-appointed sex offender vigilante who has organized a “punisher squad” that has baited several would-be offenders, leading to at least three being arrested and charged.

Previously, only a handful of offenders had sought injunctions to block release of their names. However, on Wednesday, four attorneys argued on behalf of about 50 “John Doe” offenders also seeking injunctions. They said that releasing their names would make them vulnerable to harassment, attack, loss of employment and public embarrassment.

On an individual basis, records about specific sex offenders are publicly available. But police databases listing all level 1 offenders are generally not published, though the state Supreme Court ruled in a 2016 Franklin County case that they must be disclosed if someone requests them under the state Open Records Act.

Attorney and privately contracted public defender Joshua Baldwin argued Hart’s request should be blocked based on concern for vigilante action against the offenders.

“(Hart) considers it sport to harass or otherwise harm people he believes are sexual predators,” Baldwin told Warning. “He has exhibited a willingness to support ... violence against them.”

Rather, he said he’s only trying to make information available so people can make “an informed decision” about who they live near or let near their children. And he disputed claims that posts on “The Punisher Squad” Facebook page, which he operates with several other moderators, indicate that he wishes violence against sex offenders.

One such post referenced by lawyers shows an image of a baseball bat wrapped in barbed wire accompanied by a caption that reads, “Liberals: you can’t just wave(sic) a magic wand and make pedophilia disappear.”

“I share thousands of memes on the internet all the time,” Hart told Warning. “I am a pacifist. ... It’s legal to be mean. It’s legal to offend people.”

He also said he’s changed his mind about being selective about which offenders names to publish online. Now, he said, he intends to post the entire list when he receives it.

Warning cited the Franklin County Supreme Court case in deciding to grant Hart’s request. If there is a concern that it could endanger the offenders, that’s a job for the Legislature to contend with. His job is to uphold the law, Warning said.

Baldwin argued that the Franklin County case ruling is not a precedent in Hart’s case. In that case, Donna Zink requested and received the names of 21,000 registered sex offenders across the state, but she didn’t ask for as much identifying information as Hart has, according to Baldwin.

Eli Marchbanks, a Vancouver attorney representing several of the plaintiffs, said research on the topic has shown disclosing sex offenders’ information can lead to harassment, assault, and even death. Disrupting their stability potentially increases the risk that an offender offends again, he said, and would decrease public safety.

Hart argued that even if releasing the records made sex offenders more likely to reoffend, it would be “all the more reason for people to find out who (those sex offenders) are.”

Marchbanks asked Warning to set the matter for a trial to give all sides more time to present a case.

“If that information is released now, then the cat’s out of the bag,” he said.

(Hart) considers it sport to harass or otherwise harm people he believes are sexual predators. He has exhibited a willingness to support ... violence against them. — Joshua Baldwin,
attorney for sex offenders
Posted by oncefallendotcom at 10/06/2018 02:30:00 AM 2 comments: