Stitches 77 on a skinhead forum 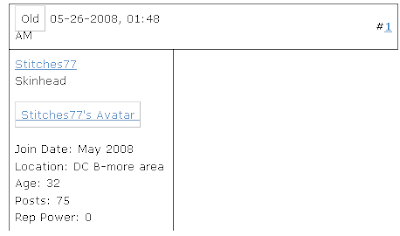 I locked out the http so Google won't link directly, but the link is to a bona fide skinhead site. So is anyone shocked Stitches 77 is racist? I'm not.

Ah, what a difference a week makes. I took a vacation, spent a wonderful Valentine's Day with my girlfriend and, well, just live life. Meanwhile, while I was out enjoying the sunshine and scenery without a single thought about the trolls at Absolute(ly) Zero (braincells), the AZholes "never sleeps."

It is no wonder they suffer from so many cognitive distortions down at Absolute Zero United. Perhaps that is why they see the devil in everything but themselves. But when you see evil in everything, and you spend your time looking for the devil, it really distorts your thinking.

Rather than the usual retort of AZU's spiel, noting they couldn't go a day without talking about me, I want to share something education. I'm sure as a consequence AZU members won't read this, then.

Does anyone remember the "Stanford Prison Experiment?" --"The Stanford Prison experiment cast students as prison guards and inmates in a fake prison environment. It had to be terminated when the students bought into their roles so much that the guards started abusing the inmates and the inmates started to riot."

In the famous Stanford Prison experiment, the mock prison guards were given the power and authority over the mock inmates. One of the psychological tactics employed by the mock guards was the "dehumanization" of the enemy. By seeing the mock inmates as somehow less than human, the mock guards committed atrocious acts against the mock inmates, including even mock homosexual acts and physical abuse. Some guards consumed by their roles they were upset when the experiment closed after only six days. The conclusion is that the situation caused the behavior ("Situational Ethics/ attributions") rather than any predispositions of the guards, as they were thoroughly screened. [see http://en.wikipedia.org/wiki/Stanford_prison_experiment]. Hence, Zimbardo has deemed this the "Lucifer Effect."

Absolute Zero United suffers from this same effect. Whatever noble cause they professed to engage in has devolved into casting pretty much everyone but themselves as evil. I'm sure along the way they sucked in a few people looking to legitimately combat pedophilia. And the anonymous internet gives them a power they could never obtain in the free world. But in "never sleeping," reading hours upon days upon weeks of "boy-chat" or "girl-chat" sites, NAMBLA, or whatever other illicit sites they pop into these days, it obviously has this effect on them. Coupled with man's tendency to generalize, we find AZU finds evil in pretty much everyone, even a woman who lost a child and helped create one of the first national sex offender laws in the country:

Absolute Zero Members have admitted to dehumanizing their targets:
http://absolutezerounites.blogspot.com/2008/04/overt-dehumanization.html

Stitch-cunt admits that she sees all sex offenders the same (except for her pet RSO Static -- hope she put on his flea collar and walked him today LOL):
http://absolutezerounites.blogspot.com/2008/04/overt-dehumanization.html

As a result, AZU feels justified by demonizing everyone that does not buy into their "kill all sex offenders" mentality. Below is a review of some of the effects of their distorted thinking:

1. AZU promotes vigilante violence. Stitch-Cunt takes it one step further by suggesting if you disprove of vigilante violence you are a pedo yourself:
http://absolutezerounites.blogspot.com/2008/05/azu-encourages-vigilantism-so-does.html

2. Stitches states that even Romeo and Juliet offenders should be dehumanized (unless, of course, we're talking about Mark Lunsford):
http://absolutezerounites.blogspot.com/2008/05/common-thread.html

4. AZU, or in this instance, their sister hate group Perverted-Justice, is not beyond exploiting a child's death for financial gain (note the case has nothing to do with a sex offender):
http://absolutezerounites.blogspot.com/2008/10/perverted-zeroes-trying-to-cash-in-on.html

That is just a few of the issues surrounding the mindset of Absolute Zero United. Unlike them, I take the time to go out and enjoy life. Perhaps that is why I can see the good in people. You'll never really see anything but hate and mockery at AZU. That is why you see the same here. AZUnites IS merely a mirror of AZU after all.
Posted by oncefallendotcom at 2/17/2009 01:25:00 AM 6 comments:

Everyone stand in awe of Derek's manliness. -- Static

OH NOES! I MADE STATIC CRY! Quick! Someone call a WAAAAAAAAHmbulance for him!

Static cries. Boo hoo, someone accuses him of "cognitive distortions," he crumples like a sheet of wadded paper, then proceeds to his CP as usual. But not without leaving a number of his sleep-inducing dissertations but he makes it a point to whine:

Another idiotic post from an idiotic man, who thinks now he has the copyright on logic. Give me a break While AZU spends the next few months bouncing back and forth between Static's special "file sharing" that landed him on the registry, their cognitive distortions, their denials of the truth, and the time it takes to follow their enemies around the internet, its no wonder they lack the ability to comprehend anything besides personal attacks. Maybe he just hates getting whipped at his own game. Static has really deteriorated into a sniveling sissified AZU yes man, shines their shoes, cleans their gutters, washes the dishes, etc. Hope he doesn't mind the smell!
Posted by oncefallendotcom at 2/07/2009 10:43:00 PM 4 comments:

Ever heard the old principle "any enemy of MY enemy is a friend of mine?" Such is the case of Jeremy "Static" Bolick. Static is the kind of individual Absolute Zero allegedly hates most-- a tier 3 sex offender, a REPEAT OFFENDER at that, as least according to the Wikisposure site:

So all it takes to compromise principles at AZU is a few sweet words to the resident cunt and to proclaim AZU's enemies your enemies as well? Absolute Zero United certainly suffers from a lack of integrity. Which means Static fits right in with AZU.
Posted by oncefallendotcom at 2/06/2009 11:17:00 PM 8 comments:

Is it too early in the year to claim a post the POST OF THE YEAR? This one will be hard to beat! More funny is the fact that Absolute Zero United posted this WITHOUT EDITING! (i'm sure that'll come not long after this post, I bet, we know how cowardly AZU is)

It wasn't me (trust me, if it was I'd be taking credit for it LOL) but whoever it was deserves a medal for telling AZU like it is!

UPDATE: Yup, the comment was taken down. But hey, Stitches 77 herself just came over here and admitted she's a cunt! Check out the message board and see for yourself!
Posted by oncefallendotcom at 2/03/2009 06:03:00 PM 5 comments: