Here is the thing, the person at the center of this story did something he shouldn't have done, even if it is legal to do so. However, it should be illegal for people to harass registered citizens, something Valerie Parkhurst is known to do. Yet, the Florida registry website has no disclaimers stating it is illegal to harass or bully registered persons in the state of FloriDUH. The other question: Why, if this man is conveniently in violation of state law at his residence, was he given the green light to move in to begin with? Smells fishy to me.

Val, an "activist?" As much as the KKK are race relations activists.

If Davie PD had some balls, they'd find a way to eliminate this vile piece of slugshit from their city.

DAVIE (CBSMiami) – Police have given a registered sex offender who was seen allegedly taking a photo of a 9-year-old girl, inside of a Publix supermarket, 30-days to find a new residence.
The case began when the mother of the 9-year-old girl, Maria Leon, said she learned about the incident that happened Monday.
“This sex offender started taking pictures of my daughter. She was there with my father. Someone in line saw him doing it and notified my Dad and called the manager.”
Activist Valerie Parkhurst, along with Leon are grateful that stranger noticed and spoke up.
“We need to look out for our fellow human beings,” said Parkhurst.  “It’s just imperative that we look out for one another and be alert for something like this.  These guys are prolific, they’re everywhere.”
Davie Police were alerted and investigated 64-year-old registered sex offender Joseph Fezza.
While police found the picture “inappropriate,” they could find anything illegal about the sex offender’s actions.
Captain Dale Engle of the Davie Police Department said, “Initially he wasn’t truthful. He denied taking pictures. We found pictures of the girl. It was inappropriate but no violation of the law.”
Davie Police checked the Florida Department of Law Enforcement and the state of New York and found no provisions barring Fezza from taking such pictures.
They can also not prove Fezza violated the state’s voyeurism law.
“First we have to be able to prove he took the pictures for lewd reasons,” he said. “Second there has to be an expectation of privacy and in such public places as Publix, there is no expectation of privacy.”
Engle said that police deleted the picture they found on Fezza’s phone of Leon’s daughter.
Fezza, however, was told though to stay away from the supermarket and police said he was given a 30-day notice of violation of a city ordinance that as a sexual offender he lives within certain distance of a school, daycare or park.
A manager where Fezza lived told CBS4 Friday that he has been evicted.
Leon plans to join other mothers Saturday at 8:30 a.m. in passing out flyers about the sex offender being in the area of Pines Boulevard just east of University Drive where Fezza lived. Parkhurst is an activist.  She plans to join the protest and pass out flyers.  “Normal people don’t do this.  this guy isn’t normal.  he got caught.”
Leon told CBS4’s Peter D’Oench, “It is disgusting. I am angry. I am really determined to warn other parents that this is happening.”
A warning was posted on Facebook about Fezza for parents in the area of Davie, Hollywood and Pembroke Pines.
Police want to know if anyone has noticed other suspicious activity in the area. Call Crime Stoppers at (954) 493-TIPS.

Maybe that Maria Leon woman should get better associates that the Valcoholic. 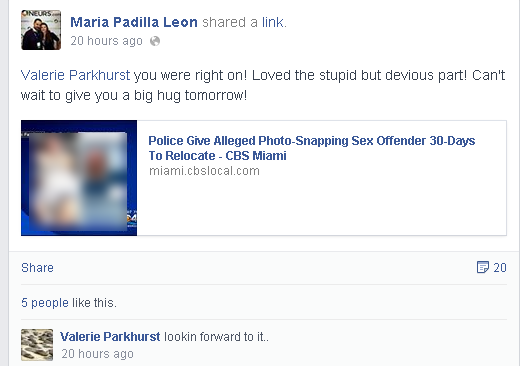 Jury unanimously awards $3.4 Million to (some of the victims) of Offendex

The one thing that stands out to me in this story is not the award but who was the award-- an actual registered citizen. To me, it seems if Chuck and Brent of Offendex limit themselves to extorting actual registrants, then this jury gave them the green light.

Victims targeted for harassment on sex-offender websites pleaded with a Maricopa County jury to financially punish the owner and take away his ability to continue operating.

On Wednesday, the jury listened.

In a unanimous verdict, jurors hit Valley businessman Charles "Chuck" Rodrick with a $3.4 million judgment on behalf of three people profiled on websites such as Offendex.com, SORArchives and SexOffenderrecord.com.

Rodrick is accused of running an Internet extortion racket that used public records maintained by law enforcement to demand money from sex offenders, harassing those who complained.

The jury awarded victims almost $500,000 in actual damages and $2.9 million in punitive damages, agreeing Rodrick defamed them, invaded their privacy, put them in a false light and abused the court system by filing lawsuits against them as a form of retaliation.

: Sex offender data is used to collect money and intimidate

The decision came after the court last week declared Rodrick the defendant in defamation lawsuits he filed more than a year ago against those who publicly decried the websites, including his ex-wife, her boyfriend, a convicted sex offender from Washington and the offender's mother.

Superior Court Judge Douglas Gerlach also allowed several of the victims' counterclaims against Rodrick to go forward, reversing the roles of the defendants and making them plaintiffs. The move effectively put Rodrick in the position of defending himself in his own case.

Rodrick, 52, of Cave Creek, appeared unperturbed by the separate verdicts. The court clerk had barely finished reading the judgments when Rodrick leaned sideways in his chair and called out to the opposing parties with a promise to appeal.

"Well, gentleman. You know the drill," he said in a loud, mirthful voice.

Rodrick, who for more than a year has refused to discuss his websites, declined comment after court Wednesday.

His victims said they were elated by the decision.

"I am super glad justice has been served," Phoenix resident David Ellis said following the trial. "I did ask (the jury) to make their verdict significant enough to keep him from ever climbing out of his hole, and they did."

Ellis said he was targeted after he began dating Rodrick's ex-wife while the couple were going through an acrimonious divorce. Court records show Rodrick posted information on several websites suggesting Ellis, a decorated combat veteran with no criminal record, was a child molester.

"It's kind of a shame. I fought for people's civil rights," Ellis said. "Then this guy, he used the First Amendment to attack me."

Rodrick's ex-wife, Lois Flynn of Chandler, said she felt vindicated. Rodrick's websites accused her of having an adulterous relationship, being an alcoholic and working with child molesters who sought to discredit the websites.

Flynn said the Internet postings damaged her reputation and affected her relationships at church, where she once worked with kids.

"In church Sunday, if anyone looks at me sideways, I can hold up the judgment and say I have been judged the right way."

The jury awarded Ellis almost $2.2 million. It awarded Flynn $780,000. It also gave $467,000 to Susan Galvez, the mother of a convicted sex offender in Washington sued by Rodrick after her son launched an Internet campaign challenging Rodrick's websites.

In court, Galvez called Rodrick a "bad man." Her son, Adam Galvez, 39, pleaded guilty to child molestation in 1996. The jury did not award him any damages, dismissing his claims against Rodrick.

Adam Galvez said he considered his mother's win a victory for the family. He said he felt vindicated the moment the judge declared him a plaintiff and he no longer faced the threat of Rodrick's lawsuit.

"I had nothing to lose," he said. "The jury did what was right. If they had gotten the time to get to know who I am, they probably would have ruled differently."

Galvez said he was putting his life back together in 2012 when he discovered his profile on Offendex.com. When Galvez refused to pay to have his name removed and began complaining publicly, he said, operators retaliated against him.

Galvez said he launched his own site, Offendextortion.com, as a way to fight back. He said Rodrick sued his mother as a way to get at him.

Galvez said two jurors told him after the trial that his conviction and background made it hard for them to award him damages. But he said they both wished him well.

None of the eight jurors on Wednesday commented on the case.

A Call 12 for Action investigation in 2013 found Rodrick's sites mined data compiled by law-enforcement agencies across the country and used it to collect money from sex offenders. Operators did not always take down profiles after payments were made, and they launched online harassment campaigns against those who balked at financial demands or filed complaints.

The investigation found the websites listed individuals as sex offenders who no longer were required to register or whose names had been removed from sex-offender databases. The sites included names and personal information of people who had never been arrested or convicted of a sex crime.

The Internet-savvy operators ensured anyone in their databases could be found easily on a Google search. They prominently profiled specific individuals, published their home and e-mail addresses, posted photographs of their relatives and copied their Facebook friends onto the offender websites.

In March, a Maricopa County Superior Court judge found Rodrick controlled the websites, owned the domain names and was the only person capable of posting and removing information on the sites.

The judge sanctioned Rodrick for violating court orders and for failing to take down posts about Ellis, Flynyn and the Galvezes.

After she and Rodrick were declared defendants, Heisig was dismissed from the case.

Rodrick's former partner, Brent Oesterblad, testified he helped disguise Rodrick's ownership interest by opening bank accounts and filing corporation papers for him. He said Rodrick further hid his role by registering website domain names in foreign countries and running them through proxy servers. His claims are backed by court and financial records.

Rodrick and Oesterblad, both of whom were convicted on fraud-related charges in the early 1990s, were at the center of state and federal lawsuits. Sex offenders and others named on the websites have accused them of running an extortion racket. Rodrick and Oesterblad are also accused of posting inaccurate or old information and using the threat of exposure as leverage in their operation.

Lawyers for Ellis, Flynn and the Galvezes credited Oesterblad with coming forward and providing crucial financial and operational data about the websites. They described his testimony as articulate and truthful. Claims filed against him in the Maricopa County case were dropped.

"It's not easy to be a defendant when you were the plaintiff," he said in a rambling closing argument Wednesday in which he denied ownership of the websites, argued about the amount of money they generated and complained about various court rulings.
Posted by oncefallendotcom at 5/16/2014 12:38:00 PM No comments: