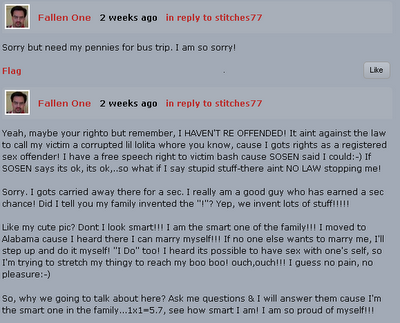 Here's members of AZU doing what they do best, impersonating people. They make fake profiles of people and post under their names. Makes you wonder how much stuff that goes on there that is simply made up by AZU. After all, they never truly allow opposing opinions at AZU. Go there and try it out if you don't believe me. It makes me wonder if ANY posts presented at AZU are ever true. Of course, they do they very things they whine about others doing. They embrace the same guy that spent years blasting them and impersonating them; integrity has never been a requirement at AZU.

ROFL @ Stitches and TSand. Stitches a "famous anti-pedophile activist?" Famous as a crackpot, maybe! And TSand was just a troll. Eventually he'll get pissed off at AZU and turn on them again.

PS: Jacey needs to work on her math skills. Somehow she believes $300 = $15. Apparently basic math skills are not an AZU requirement, either. I guess that explains why AZU is always misreading statistics.
Posted by oncefallendotcom at 2/17/2010 08:12:00 AM No comments:

Email ThisBlogThis!Share to TwitterShare to FacebookShare to Pinterest
Labels: Impersonation

It is funny how AZU points accusing fingers at others for supposedly doing what they do themselves. In a previous post I discussed Judy Cornett's son, who was sentenced to 25 years for ATTEMPTED MURDER.

AZU always points an accusing finger at sex offender activists, stating they should "accept responsibility for their actions" and to shut up. Yet, not one AZU member mentioned that their buddy Judy Cornett is trying to solicit funds to overturn her son's conviction. No one at AZU has stated "Judy, man up and accept responsibility and stop lobbying for your criminal son." No one at AZU has said, "Hey Judy, you're justifying and nimimizing your son's bad behavior. You're enabling violent behavior."

Of course not. I wonder where Judy was while her son was turning to a life of crime. Hell, maybe he read enough of the crap AZU writes there to feel justified in trying to take another man's life. And Judy was too busy harassing area sex offenders to care. I wonder if Judy spent any time warning her neighborhood of the gangbangers her son affiliated with.

But if you DO hear a peep out of them, it is to say that Judy's son's a victim. He was a victim of a sex crime years ago. However, does that excuse him from obeying the law years later? AZU certainly thinks so. I suppose they'll claim Judy's son's victim was a sex offender.

PS: As an aside, I think it funny TSand's demanding I put certain disclaimers on my page, while his own Roar For Lies blog has no such disclaimer. Again, another hypocritical statement from AZU.
Posted by oncefallendotcom at 2/15/2010 08:47:00 PM No comments:

Every time I read anything Stitches 77 says while trying to debate facts with anyone, or even discussing anything outside the realm of ad hominem attacks, lame impersonations, blatant lies, and kill em' all chanting, she's as lost as a Brit at an American Football game. The more you read, the more apparent her clueless nature is obvious.

[from: Something About Mary] Stitches again shows her lack of comprehension skills. Stitches forgets we have a little something called PREDATOR PANIC. Stitches denies we are hypersensitive about sex offenders and denies the impact of societal fears.

Or how about THIS article?

http://www.csicop.org/si/show/predator_panic_a_closer_look/ -- Predator Panic: A Closer Look by Benjamin Radford. Of course, since Radford made an appearance of Americans Reality Check, AZU decided to do an article on him, complete with ad hominem attacks and more cognitive distortions than you could shake a stick out.

Stitches is so blind she can't admit the possibility that a person could abuse their position. Surely those in power are NEVER corrupt and NEVER lie to those under their care?

Ever heard of a search engine, Stitches? http://current.com/items/89319040_law-enforcement-this-weeks-corrupt-cops-stories.htm

Oh, and now Stitches denies that people teach bathing a child is grooming for sex. Sure a "child victim advocate" as "educated" as Stitches can't possibly be wrong on this one? http://www.protectchildren.ca/pdfs/itsyourbusiness_en.pdf

Stitches makes four key distortions in her tirade. Perhaps her desire to attack Mary made her sloppy. Stitches misquotes a study, as usual, clipping what she thinks backs her up. And of course, since she sees all sex offenders (except Static and TSand) as subhuman, she forgets that she's talking not about a registered sex offender, but someone NOT on a registry.

Stitches forgets one important part of her argument. In addition to trying too hard (and failing miserably) to try to prove her wrong, she forgets to do her research. Funny thing is, she accuses Mary of being such a "bad" influence and a red flag, while studies show a primary trigger for relapse is stress caused by-- what else? -- vigilantes like Stitches harassing, threatening, and attacking registrants.

http://ccoso.org/Vilification.pdf "stigmatization of sex offenders is likely to result in disruption of their relationships, loss of or difficulties finding jobs, difficulties finding housing, and decreased
psychological well‐being, all factors that could increase their risk of recidivism."

Then of course, Stitches makes THIS comment, posing as "JTC" for "Julia Tuttle Causeway." The stupidity of the above comment speaks volumes. By this time, Stitches has fully exhausted her pseudo-intellectualism and has reverted back to her infantilism. This side of Stitches is her true side. It comes so naturally, whereas her fake smarts just doesn't cut it. Do us a favor Stitches and hang up your dunce cap, you're not fooling anyone!
Posted by oncefallendotcom at 2/09/2010 01:04:00 AM 4 comments: