Brett Franklin At It Again

Brett Franklin, crazed cyberterrorist, is at it again! Calling people erroneously listed on Perverted Justice's "Wikisposure" project. This site lists lies and slander directed at individuals, along with their personal information, for the sole purpose of causing harm of others. Or as they puuting, the love of "pwning" people or for the "LOLZ." Anyways, this is from another site that spoke about this guy:

Criminal Activity : Calls former sex offenders, regardless of their risk level, and threatens violence against them and their family members.One report we recieved is that Brett has called one of my associates while he was visiting his parents house late at night simply to harass him. His parents now plan to change their number to a private one.Another report states that Brett has threatened a man and his family so much that one of his teenage daughters is afraid to attend her classes.Brett also claims to be a gang member and creates violent gangster videos for YouTube that he stated he is proud of. If you have further verifiable data about this vigilante, please contact Nicholas Raz or leave a comment.

Extras: He is also a frequent visitor of Absolute Zero United and the anti-Corrupted Justice blog. He has a fascination with raping males, and uses screen names that depict violence, such as Mr. Punch or "hater" in it.

If you have more info on this cyber-terrorist, contact me at warpedohio@gmail.com.

You can find instructions to file an IC3 complaint and tips for dealing with internet trolls here:
http://www.oncefallen.com/TheTrollPatrol.html
Posted by oncefallendotcom at 1/31/2009 11:37:00 PM 7 comments:

Stitches 77 and AZU exposed yet again

Did you know the Anagram for Stitches is "SHIT SECT?" That describes Absolute Zero United perfectly! A shit sect!
Her day of being exposed is coming soon. Maybe Marina will end up getting a job as a Gardner, eating Rice a Roni [the SAN FRANCISCO treat], going to school at some art school in Valencia, CA or something so she can draw pokemon characters and playing Zelda: the Windwaker. Who knows?
My favorite comments of the day:
http://anonymouse.org/cgi-bin/anon-www.cgi/http://www.haloscan.com/comments/absolutezero/1044836956325022339/#60811

AZU does more than edit posts, they doctor web snapshots and create lies out of thin air. They still haven't shown me proof of that false accusation they made against poor Patty Wetterling.
http://www.haloscan.com/comments/absolutezero/1044836956325022339/#60814
Sounds like you've got some professional whiners around here. LOL
WAH WAH WAH 01.27.09 - 7:00 pm

You don't say? That's what AZU is famous for, a society full of bitchy, moaning losers who contribute nothing more to society than proof of what happens when nutjobs stay off their meds too long. Since they love books, here's one for them: 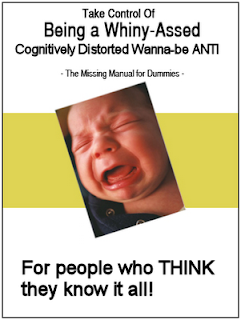 I leave on vacation for two weeks and like clockwork, the ritalin abusing team of the douche and the cunt (aka Static and Stitches77) have turned their attention to a "boycott" of Amazon.com. I'm sure it will be as rousing a success as their "boycott" of Disney/ ABC's 20/20. Considering how the previous boycott was over airing Petra Luna's performance last march on 20/20, I can safely assume this tirade is the result of a botched order for her "marital aids."

Lets look at their "petition," for example.

If you've ever wondered why online petition sites are as useless as tits on a bull, here's your proof. I'm sure Bumcheeks Jones will fly from the UK and hold a picket sign in front of Amazon LOL. First of all, anyone can sign the petition multiple times, as is likely the case here. After all, honestly, only at the most 2 dozen people are even nominally active in AZU. Lets take a look at some of the signers of this stupid petition:

#5 - Hydra X: An internet dignitary, I'm sure LOL
#10 - Stitches 77 from the CONGO: The Congo? DON'T YOU MEAN CALI, MARINA?
#35 - John Homeless: Wasn't that a character from Brian's screenplay in Family Guy?
#49 - Bumcheeks Jones: Isn't that Stictchcunt's pet name for Static?
#87 - The beast within: Must be awkward meeting women. Hi, my name is Beast Within LOL
#89- Letsgetrealistic Smith: Another play on another man's screen name, which is typical of AZU

Lots of Traditional Native American and initials rather than real names, lots of double posting, and of course, two dozen "anonymous" signatures. Now, why would anyone protesting such allegations need to remain anonymous? Just think, after 3 weeks of this, they have 250 signatures, yet most fall under the "suspicious" category, and and schmuck can sign with names like Bumcheeks and John Homeless.

Let's see how much influence they had on Disney.

In the months following Absolute Azro United's "Boycott" of Disney, stocks stayed the same until suffering from the same stock dip as every other company hit in the recession. So AZU has as much influence on Disney as they had Bear Stearns, GM, and the oil industry, which is NONE. And signing the same online petition over and over again is just as stupid and futile. The truth is more likely some numbnut over at AZU felt snubbed by Amazon somehow and decided to do the same stamping of feet and lying of teeth they are prone to do. I'm on my way to Amazon.com to see if anyone wrote any books to verify AZU's bogus claim about Patty Wetterling having a sex offender son.

Seems Petra Luna[tic], or as I call her, "Putrid Lusa," is STILL suffering from the 20/20 fallout. Do you think her publicity scheme was bad? It was nothing compared for her alleged theft of the "copyrighted" April's Law (How does one "copyright" a law anyways?). Anyways, much like the "war on terror," Putrid Lusa's "war on abuse" took a right turn at Albequerque and feuding with "Lil' Deb," who's anything but "little;" which begs the question- who exactly WAS Petra Luna's newest [s]hit song "I'm Fat, So What?" REALLY directed at? Hmmm................

AS OF RIGHT NOW, PEDOPHILE HUNTERS, INC. NO LONGER ENDORSES, NOR DEFENDS PETRA LUNA, GENERAL RED, OR DOC HOLLIDAY. ANYTHING THAT RESULTS FROM PHI'S WITHDRAW, WILL BE ENTIRELY ON THEIR SHOULDERS FOR STABBING US IN THE BACKS. ANYONE THAT CHOOSES TO SIDE WITH THEM IS WELCOME TO DO SO, WITH NO HARD FEELINGS. PEDOPHILE HUNTERS, INC. IS ALLIED DIRECTLY WITH THE YOUTH VOICE INITIATIVE, AND PETRA LUNA ENTERED THAT WEBSITE WITHOUT PERMISSION FROM THE OWNER, AND DELETED EVERYTHING ON IT, BEFORE DEMANDING THAT SHE CHANGE THE NAME. THE NAME YOUTH VOICE INITIATIVE IS TRADEMARKED UNDER LIKA'S NAME ALONE. PETRA HOLDS NO LEGAL RIGHT TO ANYTHING CONCERNING YVI, PAST, PRESENT, OR FUTURE.-
REAPER OF SOULSFounder/Co-OwnerPEDOPHILE HUNTERS, INC.
If you're a Pedophile, one of their defenders, or you have one of the above on your friends list, do not waste my time sending me a friends request, cause I'll deny it.

I intended to address the war between some Anti factions a few months ago, particularly some group called House of Yahweh. Some of the fringe members of the Absolute Zero group. But here's a good little comment from the same You Tube link:

BlueAngelOfDeath (8 months ago)
Spam Marked as spam
[quote] MaximusGIuteus March 26, 2008 (Block User) Hey there, Impostor. I hear that you used to be in Yahweh. I wonder why they kicked you out.Could it be that you were pretending to be an Anti and stalking them and harassing them? Yes, it certainly could be that. So, why are you pretending to be Rebel Child? Do you not have enough problems in your pitiful, pathetic, and completely worthless life? You know, I could change that pretty easily. It wouldn't take much, but it would leave me bored, cause I'd have to stop going after people who are worth my time, just to deal with you. lol Stop pretending to be worth a shit [/quote]

I've never been in Yahweh. Nice try though. lol﻿

Ever notice the small time movements have the most infighting? Looks like Petra's army truly IS an "Army of One." I guess since the Army doesn't use that slogan she can steal that one too! ROFL!
Posted by oncefallendotcom at 1/04/2009 07:09:00 PM 4 comments: