Russell Speigel is "innocent until proven guilty," but the guilt is written on his face, in a way

CROSS-POSTED FROM THE SHIITAKE AWARDS

So everyone who is arrested is innocent until proven guilty. However, Russell Speigel of Cottage Grove, WI, has guilt written, or rather, "burned," onto his face. If there was ever a time to use the old adage, "play with fire and you'll get burned," now is that time. If he keeps this up, he might be up for a Darwin Award rather than a Shiitake. 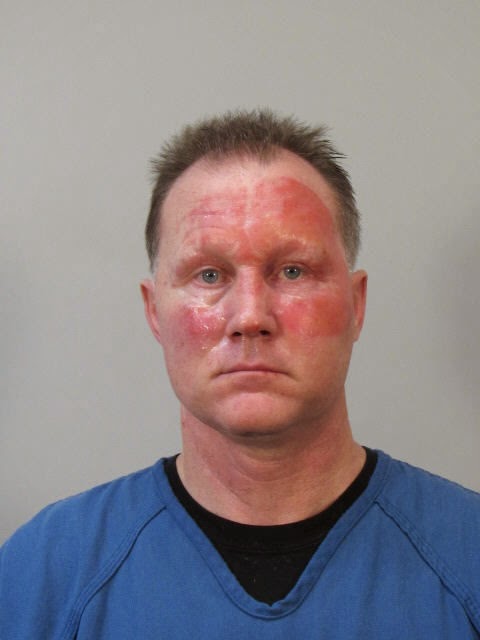 Dane County authorities arrested a town of Cottage Grove man they say set fire to a house Sunday night in a vigilante effort to keep a sex offender from moving in there.

Russell A. Speigle, 50, was arrested on a tentative charge of arson for the fire, which destroyed a home at 4721 Gaston Circle in the town of Cottage Grove, Sheriff Dave Mahoney said Tuesday.

Investigators are now trying to determine if Speigle was responsible for another fire that damaged the same house in December, Mahoney said.

They are also looking for some pieces of evidence that could connect Speigle to the fire, the Sheriff’s Office said.

The home was to house 40-year-old Harold Nyberg as part of a supervised sex offender release program, over vocal opposition from the man’s neighbors — Speigle among them, Mahoney said.

The first fire, on Dec. 8, caused $90,000 worth of damage, the Sheriff’s Office said. The home was repaired after that blaze and was considered a total loss after Sunday’s fire.

Speigle lived “only doors away” from the Gaston Circle home, Mahoney said, and had attended a notification meeting the Sheriff’s Office held last week to tell neighborhood residents about Nyberg.

“Like many, (Speigle) voiced his displeasure” that Nyberg was coming to the area, Mahoneysaid.

An article about the notification meeting from The Herald-Independent quoted Speigle saying the neighborhood was “upset and on guard” with Nyberg set to move in.

Nyberg was convicted in 1994 of second-degree child sexual assault and was later committed as a sexually violent person to a secure treatment center in Mauston, according to courtrecords.

Despite objections from Speigle and other neighbors, some of whom are now pushing the Cottage Grove Town Board to adopt an ordinance barring sex offenders on supervised release from living there, Nyberg was set to move to the home within a fewweeks.

“The place to carry out those kinds of actions is at the public notification meeting, so that we can address those concerns,” Mahoney said. “What is unacceptable is acts of vigilantism such as this.”

Investigators talked with Speigle at his home soon after the second fire, Mahoney said, and could see that he had recently suffered burns.

Speigle’s booking photo from the Dane County Jail shows what appear to be burns across much of his face.

Mahoney did not say why investigators didn’t arrest Speigle that night, but the Sheriff’s Office said authorities learned he had left Cottage Grove soon after talking with detectives.

Investigators with the Sheriff’s Office and the state Department of Justice continued building a case against Speigle, tracked him to a relative’s home in Muscoda and arrested him there Monday, Mahoney said.

Speigle was treated and released from the UW Hospital burn unit, then booked into the jail Tuesday afternoon, the Sheriff’s Office said.

At a news conference Tuesday, Mahoney declined to say whether authorities suspect anyone other than Speigle may have been involved in the arson, or if Speigle has been cooperating with investigators.

Mahoney stressed that Sunday’s blaze put firefighters and first responders in danger, and said the “most alarming” aspect of Speigle’s actions was that he set fire to a home so close to where he lived.

“Not only did the actions of Mr. Speigle endanger public safety professionals, it endangered his own neighbors,” Mahoney said.

As they continue their investigations, Mahoney said authorities are looking for two gas canisters they believe Speigle used in the Sunday night fire.

Mahoney said investigators could see Speigle holding the red, plastic jugs Sunday night in images taken from a camera near the home that burned.

Valerie "Valigator" Parkhurst has tried some stupid things, but she has reached an all-time low.

There was a story in USA Today about a new family torn apart by the registry. The article states:

The father of month-old premature triplets who were staying in a hotel with his wife and toddler daughter with no money to get home was arrested Tuesday at a Houston motel for a sex offender violation.

Derrick Session was arrested following his appearance in a KHOU-TV report about the family's financial troubles...

Officials said Session, 36, recently failed to maintain his offender registry status in Texas, and a warrant was issued for his arrest. He was taken into custody after a detective recognized him in the news report.

As usual, Valerie Parkhurst slithered her way onto the  article comment board and began her usual bout of alcohol-induced trolling. But her brain must have been even more soused than usual because she came up with a crazy idea: 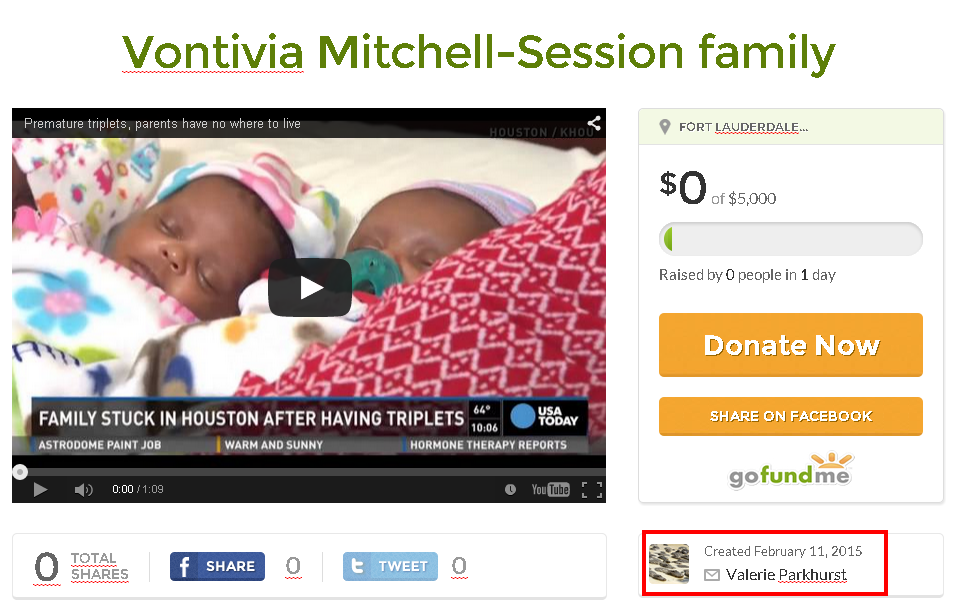 Yes, Valerie Parkhurst has created a fake "GoFundMe" campaign to collect money from Registered Citizens to help this stranded family. Are we really to believe a crazy, drunken broad from Davie, FL with a propensity to draw guns on people and who discusses murdering registered persons daily is going to drive all the way from Davie, FL to Houston, TX (a mere 1168.1 miles each way) and deliver $5000 to the family of a Registered Citizen? I sincerely hope no one is THAT stupid.
Posted by oncefallendotcom at 2/13/2015 03:33:00 AM 1 comment: