First of all, I would like to thank T-Sand for proving once and for all how people like "Shoalanda Speaks" and others who allegedly abhor sex offenders but yet compromises those alleged principles when she wishes to attack someone, a la Absolute Zero United.

Meet "Shoalanda Speaks." Probably every town has one of these local personal opinion blogs of area events and politics, along with a local "crime blog." These people, much like a certain Ohio online new rag (*cough*Rusty*Big 3 News*cough*), are not legitimate news reporters, merely someone who has a blog and an opinion. No matter how legit they try to be (like Big 3 News making its site looking like the local news station sites), the simple fact is, they are not. "Shoalanda Speaks" is one of those kind of people. Unlike the REAL news, people like Shoalanda do not rely on stuff like credible sources or ethical reporting.

A few weeks ago, Shoalanda wrote an article attacking me. I'm rather used to it because of my line of work in addition to hosting this fact blog on AZU's tactics, but this time I felt threatened because #1 I felt legitimately threatened by her blog (I'm not too keen on people who feel we should be branded), #2, Shoalanda relied on Wikisposure as a legit reference (a reporter's faux pas), and #3, she posts a picture of someone who has absolutely nothing to do with my case whatsoever and made her a potential targetfor dumb fucks who probably don't realize we've been divorced since the mid-90s, a year and a half BEFORE my arrest (Thanks again to T Sand for showing more examples of his lack of reading comprehension).

Not content with her stupidity, Shoalanda blatantly defended her actions and made the mistake of recruiting TSand in her personal attack, forwarding emails which has landed on his blog.

T-Sand was more than happy to run his mouth and blatantly show his connection in the latest attack by posting it on his Roar for Untruth blog:

I think it is funny because Shoalanda and AZU have the same mentality: any enemy of my enemy is a friend of mine. Below is a disclaimer you'll find on the Shoalanda Speaks blog:

It is more ironic Shoalanda quotes Wikisposure, a site that STILL has a T-Sand page on their site talking about HIS alleged mental instability. You can STILL find this on T Sand's Wikisposure page, yet he defends them, likely in the hopes they will remove them like they did Static a few months ago:

I honestly hope Shoalanda's readers see this and think long and hard about who she is and represents. Shoalanda tells her readers this:

"we will not accept any blogs that support rapists, pedophiles, etc.--that should be self-explanatory."

Yet, she consorts with T-Sand, a convicted sex criminal and repeat offender. This is what we call in these parts HYPOCRISY!
Posted by oncefallendotcom at 5/26/2010 03:53:00 PM 6 comments: 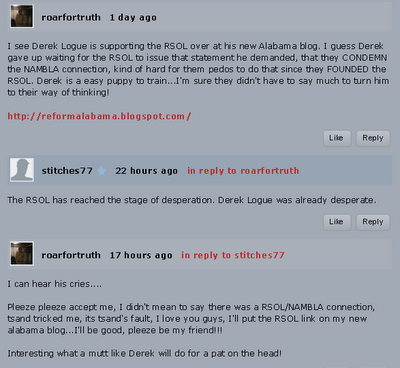 1. My blog http://reformalabama.blogspot.com/, is NOT "RSOL Alabama," it is "ReFORM Alabama," short for Reistered Former Offender Restoration Movement. My state site is an independant site you dumb fucks. That being said,

2. When was the last time you read the RSOL site? There's a pretty bold disclaimer there, asswipes.

Here's a link for AZU: http://www.hookedonphonics.com/

Trust me, you illiterate cunts need it! But then again, you can't teach an old dog new tricks, but at least the old dogs at AZU can be spayed and neutered!
Posted by oncefallendotcom at 5/18/2010 03:59:00 PM No comments:

I wonder how TSand's victim felt

AZU's personal lackey TSand recently decided to impersonate a victim on his blog [word of advice, TSand, try to at least get the personal info right next time] in addition to impersonating me back at AZU, and on his blog, he offers up this comment:

Seeing as how Clay Keys can be located on the sex offender registry in Florida, seeing as how he's done his share of activism and has his OWN Wikisposure page, I was just wonder what TSand has done to make atonement for HIS victim. I wonder what kind of justice TSand's victim would want, and how he or she feels about a so-called "victim advocate" group like AZU supporting TSand. 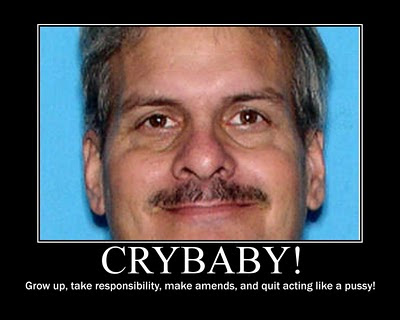 Grow up, Clay. You're still holding a grudge simply because you got slighted by someone over a year ago and I wouldn't support your quest for revenge, so you go to the enemy out of spite. The more you protest along with AZU, the more foolish you and AZU are looking. Ids it any wonder that NO ONE EVER takes you clowns seriously? Everyone point and laugh at AZU!
Posted by oncefallendotcom at 5/14/2010 05:11:00 PM 5 comments: