Chris Hansen, why don't you have a seat over there? There have been a lot of ironic reports lately, but this one takes the cake. Chris Hansen of "To Catch a Predator" fame was the target of a hidden camera investigation, where he was caught cheating on his wife with a woman 20 years younger than him. I wonder if he offered her milk and cookies first LOL. (PS: Yes I made on small edit to this report, but the media needs to call PJ what it truly is, a cyber-terrorist group, NOT a watchdog group)


He's made his name with a controversial show that catches would-be internet sex perverts in televised stings.
But now Chris Hansen has found himself on the receiving end of his own hidden camera tactics, after the married NBC anchor was secretly filmed on an illicit date with a blonde television reporter 20 years his junior.
Hansen, 51, has allegedly been having an affair with Kristyn Caddell, a 30-year-old Florida journalist, for the last four months.
Last weekend he was recorded taking Miss Caddell on a romantic dinner at the exclusive Ritz-Carlton hotel in Manalapan, before spending the night at her Palm Beach apartment.
Hansen, who has two young sons, was caught in an undercover sting operation arranged by the National Enquirer.
Secret cameras filmed the couple as they arrived at the hotel for dinner and then drove back to her apartment - where the pair left, carrying luggage, at 8am the following day.
Hansen lives in Connecticut with his wife Mary, 53, but he has been spending more and more time in South Florida investigating the disappearance of James 'Jimmy T' Trindade - and allegedly sleeping with Miss Caddell.
A source told the newspaper the pair met in March, when they were both out with friends at the Blue Martini Lounge in Palm Beach.
Miss Caddell, who was once an intern with NBC in New York, introduced herself to Hansen in the VIP area, and 'there was an immediate physical attraction between them', according to the source.
The source alleged: 'Chris and Kristyn got on so well that she ended up going back to his room at The Colony Hotel in Palm Beach - and later boasted to pals about staying the night with him.'
The couple have allegedly continued to meet up in Miami and Palm Beach over the last few months, with Miss Caddell and her friends even flying to New York to spend a weekend boating with Hansen, the Enquirer reports.
According to the source: 'Chris sends Kristyn flowers and tells her he loves her, but he still doesn't seem all that motivated to leave his wife for her.
'He's telling her he loves his wife too, but they've grown apart over the years, and she's not sure what he should do.'
Hansen has worked for NBC for two decades, but became famous with his controversial Dateline series To Catch a Predator.
The show's producers work with CYBER-TERRORIST GROUP Perverted-Justice, whose volunteers pose as underage girls offering sex on the internet.
But when they arrive to meet the girls, they find themselves confronted by Hansen, his film crew and sometimes the police.
The Enquirer's sting took place last weekend, and recorded the pair as they went for dinner at the Ritz-Carlton's Angle restaurant on Friday at about 7pm.
Miss Caddell was dressed up in high heels and a short, revealing dress, and according to the source they spent much of the evening staring into each other's eyes.
They left at 9.15pm, and went for a drive along the ocean front, before being filmed filling up Miss Caddell's Jeep at a nearby gas station.
Then they drove to a liquor store, and Hansen emerged clutching a bag full of bottles. The couple returned to Miss Caddell's apartment at 10pm. At 8am on Saturday, they, with Hansen pulling luggage behind him, and she drove him  to the airport. A source told the Enquirer: 'They were both wearing different clothes from the night before... Kristyn's hair was dishevelled as if she'd just rolled out of bed.'
Posted by oncefallendotcom at 6/30/2011 09:28:00 AM 6 comments:

Acme Cleaning Service got cleaned up. Oh, the irony!

Like I needed any more proof Absolute Zero United is filled with self-loathing closet pedophiles who cannot be honest about their conditions.

For quite a few years, Acme Cleaning Services has claimed to "hijack" sites they claimed were "pro-pedophile" (which, in reality, were most likely sites created by AZU members for the sole purpose of claiming they were outing pedophiles. After all, Tsand once impersonated Stitches 77 and created two blogs, one of which was "hijacked" by Llort and Rez). Well today it looks like Acme Cleaning Services blog was itself cleaned out and the blog owner called a "pedophile." No honor among thieves?

Absolute Zero mocks others' physical appearances, but they have no room to talk 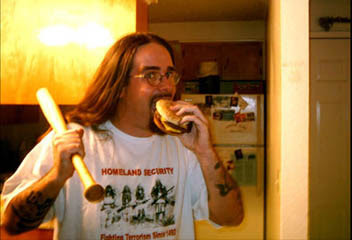 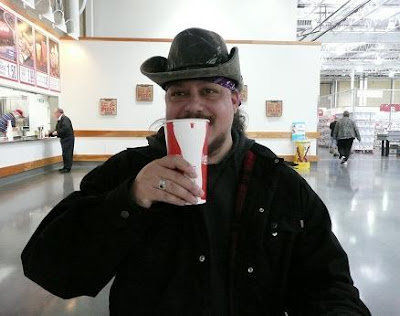 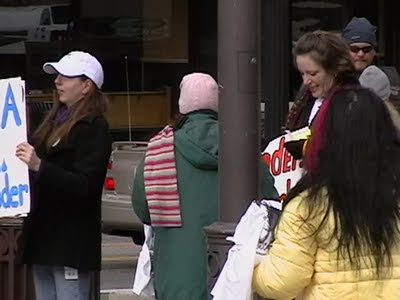 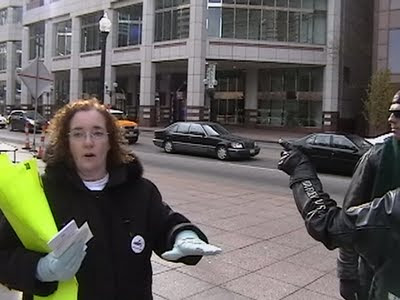 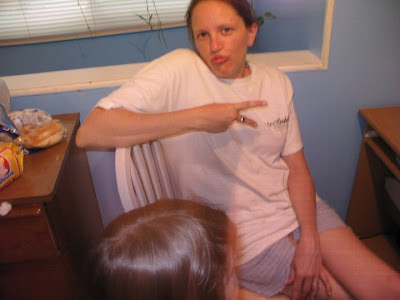 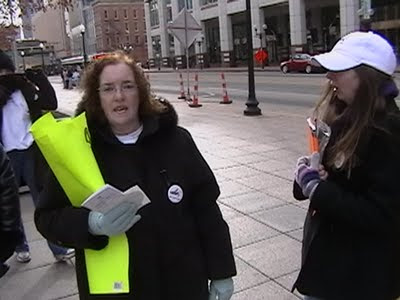 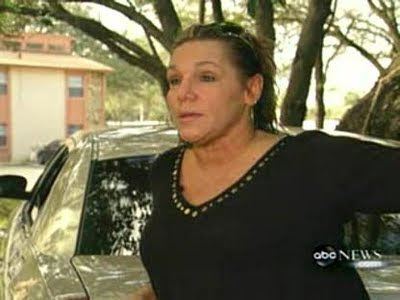 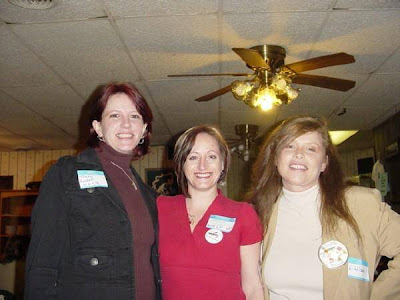 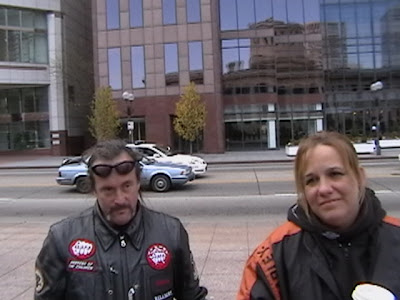 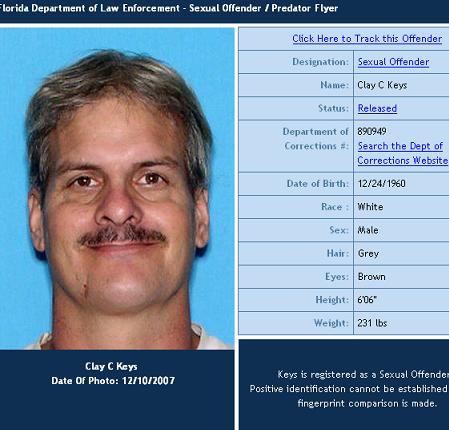 Absolute Zero United loves to talk about other people's looks but have you ever wondered what THEY look like? Well I have a few pictures of them, mostly from the Ohio Rally in 2007. I added a couple of their buddies from PJ and Mark Lunsford. Take a look, and ask yourself if these people should be making fun of ANYONE'S looks.

Absolute Zero United rears its ugly head, celebrates the suffering of others, as usual

For pretty much all of this year, I have been using this blog to raise awareness of other vigilantes like Barbara Farris and Danielle Schneider, who are exploiting sex offenders for personal game. That is pretty low. However, this site was (and still is) primarily a blog about Absolute Zero United, a ragtag bunch of cowardly online cyberbullies and make anonymous threats. My feud with them has been well documented. They lie about me, I post the truth about them. I've pretty much OWNED them. I've enjoyed a break from them but they are back in time to laugh at the death of a great person.

Comments like these make it obvious AZU only exists to troll. Well, Karma is a "Stitch," and someday it will be returned to them tenfold. The sooner the better as far as I'm concerned. Here they are attacking SOSEN CEO Mary Duval, a TRUE hero in every sense of the word, after a long battle with illness.

It is funny how they still defend Clay Keys, but they have no morals. It is funny how now Stitches is talking about praying to God after stating in other places she was pagan/ atheist. I have Stitches all figured out. Like Clay Keys, she is a pedophile who is trying to "out" others to keep the heat off herself. She's also the classic troll. Today's she's claiming Christian but tomorrow she'll go on another blog and bash believers.

And they do more to bash victims than any group out there. Do I need remind them about bashing Patty Wetterling and spreading a rumor she has a son on the sex offender registry? 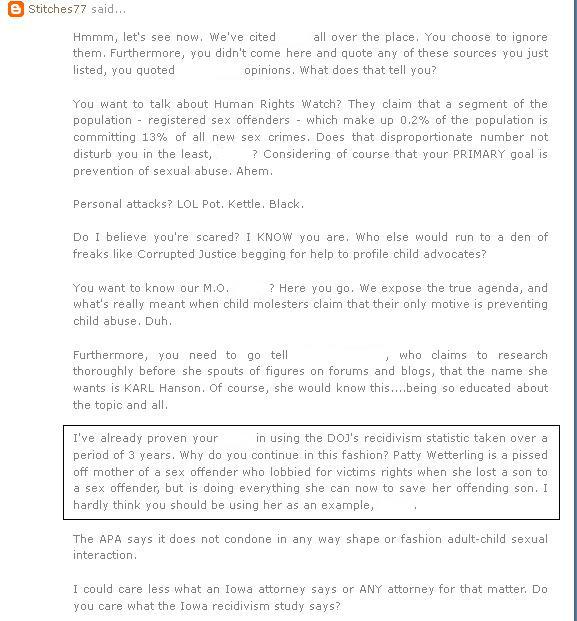 The fact is Stitches and Absolute Zero are closet pedophiles who advocate violent actions against others by pretending to be child victim advocates. Just look up charter member Clay Calhoun Keys. Don't be fooled! Even that schmuck at Predator Magazine recognizes AZU as a poser blog, and he's as dumb as a box of rocks! 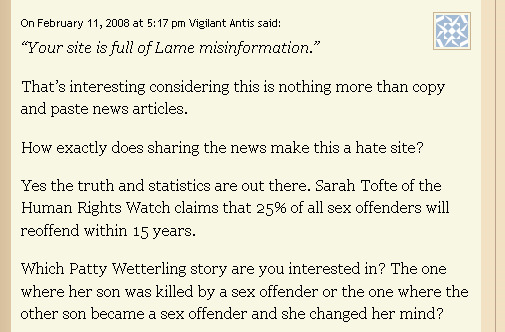 Corey Michael Wright of Predator Magazine has a criminal record 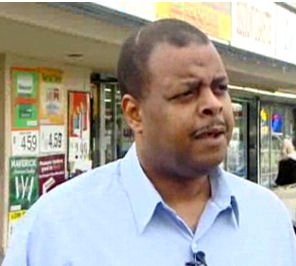 This is Corey Michael Wright of Sacramento, CA. Corey Wright has made local headlines by offering yet another sex offender rag, "Predator Magazine." He is looking for advertisers and donations, yet he claims his magazine is not for profit. A few months back, an iPhone app was blocked in California because making money off sex offender registry was deemed to be illegal.

In that recent news article by KCRA, they provided a link to his Facebook page. So I asked some of my friends who actually use Facebook to send me some info.

On his page he is soliciting "donations." He's even kind enough to give you his account number!

What is Higher One Bank? Well, they give credit cards to college students. I personally have a hard time believing this guy is in college. The routing number goes to Bancorp, based in New Haven, CT, 3000+ miles away. I'm curious as to why he is using a student loan bank to solicit donations, while claiming to be non-profit? He is also looking for advertisers. Yet, he claims it is a non-profit. I smell bullshit.

Second, Corey M Wright, after pressure by people online, admitted he had a criminal record: 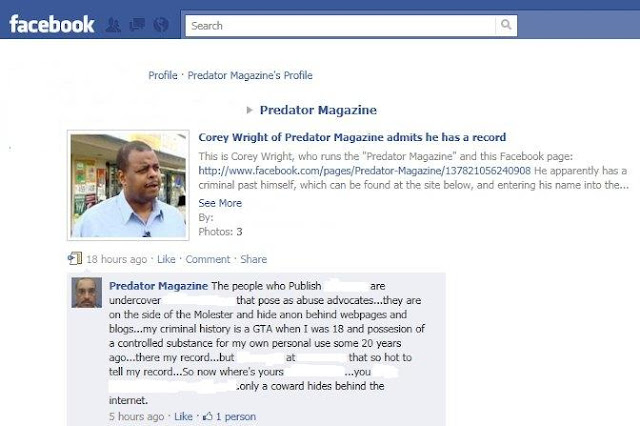 His criminal record can be viewed in detail here. He has a history of drugs and theft. He tried to lie at first and claim his middle name was Todd not Michael, but later admitted he did have a record. 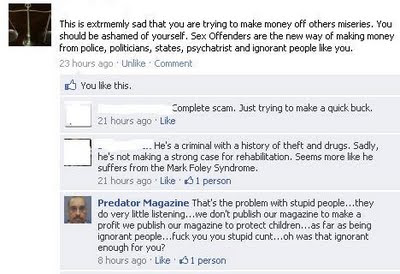 That is all you need to know about Corey Michael Wright. He is a criminal abusing sex offender hysteria to make a quick buck. Sadly, a few people will blindly donate to this scam artist.

One last thing, he is a black supremacist. No one even bashed him for being black, yet he throws out this bomb.

ADDENDUM: I was recently notified Corey Wright posted a dating profile. Imagine that, a 40 year old wanting to hook up with a barely legal. I'm sure he'd tap a younger gal if he could get away with it. 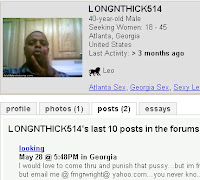 Someone seriously wants attention. His name is Clay Keys/ Roar4Truth/ Tsand. We've addressed him quite a few times here already but it helps to remind people every now and then about him. So it is time to bump him. 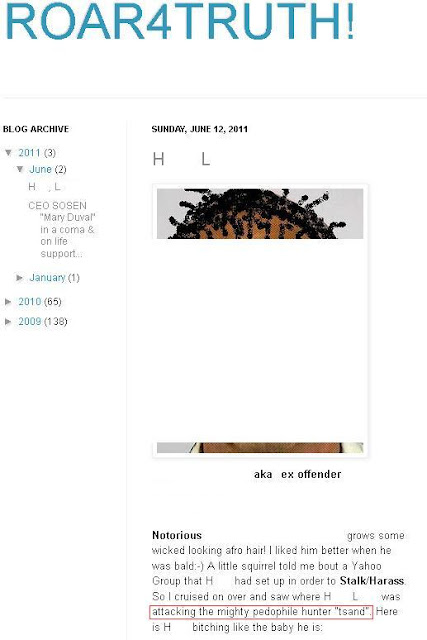 He hosts the Roar4Truth blogspot as well, where he is posing as a "pedophile hunter."

Ironically the same guy that poses as women on forums and once used Jessica Lunsford's face while mocking Absolute Zero United and made threats against members of AZU like Rob Taylor is now endorsed by the same group he once attacked.

Clay Calhoun Keys/ Tsand is a convicted sex offender who is currently posing as a victim advocate, and works with other questionable "victim advocates" (vigilantes) like Shoalanda Speaks, Absolute Zero United, Rob Taylor/ Greenville Dragnet, and as Clay has recently claimed, he's even been in contact with crazy Floridiot Barbara Farris.. For what purpose? It is for you to decide.

Just a few more posts for you to consider:

And this site from those she acts as cheerleader for these days: