Speaking of butthurt, it seems the trolls at "No Peace For Predators" are still whining and obsessing over AZUnites 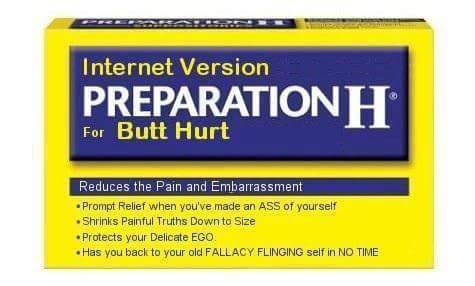 It seems when one group of trolls get butthurt, the other trolls must have flashbacks from all the times AZUnites has made them look like the braindead wannabe biker gang that they are (maybe THIS POST did the real trick, and despite what the claim, none of these were edited). Whatever the case may be, the NP4P decided that somehow despite my nearly month-long vacation from the front lines, I've somehow still managed to give them traumatic flashbacks from all those times I bashed those fools. At any rate, here are the screenshots so you can have a good laugh at their expense.

These vermin have been pretty quiet as of late, so my guess is these losers are desperate to stay relevant. The last time they've had any press was that time the "Campaign For Freedom" had David Rowe blubbering like a baby on ActionJax:

"According to Rowe, disgruntled sex predators are distorting his character on blogs and social media sites like Facebook. They call him a violent vigilante. Action News did some digging and discovered that Rowe was recently arrested for fighting at a local bar."

I guess somehow I edited Action Jax too? LOL. But I digress. Just what has NPFP actually accomplished, besides nothing? It is funny to read what the folks at NPFP post, seeing as how they weren't even on hand to support Lauren Book's march across FloriDUH last year. I was there, but they were not. It is interesting to note I have not seen a single FloriDUH vigilante marching with Lauren Book. After all, the Books stopped in Jacksonville. where is Valigator posing with the bimbo Book? How about Judy Cornett? What about Barbara Farris, or David tROWEll? or that "I'm so fat I can't find my Peter" Mason? And to think, they've missed an opportunity to bash me in person. I guess that's because we all know their goal is to bully, not to protect kids.

Ironically, they think I've finally "crawled out from under my rock." Look around folks, I may have taken a bit of a sabbatical but I haven't been too gone. As for NPFP, I'd say they've been gone so long, no one knows if they ever existed to begin with.

Personally, I love it when I see butthurt trolls crying about me. You losers have made me smile :)

... although, I can't let that little lie about me "saving pictures of children for perversions" slide. We all know Valigator made that one up. Tsk. Tsk. The clods just can't do anything right, can they?
Posted by oncefallendotcom at 1/21/2016 11:15:00 PM No comments:

The crybabies over at "Sex Offender Updates' butthurt over AZUnites's earlier post. The truth hurts. 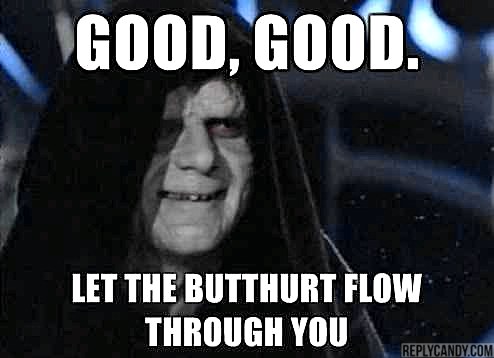 
Apparently, the anonymous pussies over at that scammer's website "Sex Offender Updates" has been pissing and moaning over an earlier post I made on this blog.

After reading their lame "response," it is painfully obvious the numbnuts who run the website lack reading comprehension skills. Here is their whiny response:

"In his blog post, Derek Logue referred to Sex Offender Updates as a 'scumbag wannabe vigilante group advocating the death penalty for those on the registry.' ​That is not accurate. We do not condone vigilantism. However, we have advocated for the death penalty. But, we have not said that all sex offenders on the registry should be executed. We don't think that all sex offenders deserve to be executed.​ So, here we have a guy who basically misstates and misrepresents our organization in his very first sentence."

They obviously can't read. (I never said they want to kill all sex offenders, either, so who is misrepresenting who?) They talk as if murders and assaults are the only forms of vigilante violence, but they neglect online vigilante violence as well. Harassment and death threats litter their FB page, and they are not condemning the comments or deleting the nasty remarks. The very existence of a website that posts defamatory and harassing information (info they borrowed from other dubious sites) about registrant activists, not just yours truly, is in itself the promotion of vigilante violence.

These are just a few of the FB comments from the supporters of that site:

Any claims they don't promote vigilante violence is easily dispelled by the comments. After all, their scam site begs people to become "keyboard warriors." What a joke!

Then there is this:

"If you think child rapists should get the death penalty, please sign up and join us in this fight. How come we do not execute these defective human beings when public opinion on this issue is about as unanimous as you could ever get in a nation of more than 300 million people?" (The"'Bandwagon" fallacy)

Their entire counterargument to AZUnites is this -- "So, here we have a guy who basically misstates and misrepresents our organization in his very first sentence. If that is how he is going to define us, why should we believe him when he defines his own sex offenses?" In other words, because I hurt their little feelings, I'm not to be believed. Cry me a river. No misrepresentation there. Here, SOU has engaged in the "Genetics" fallacy.

Well, why believe them, I ask? After all, they use a FB "album" as evidence that low recidivism rates, as stated here:

"The argument that 95% of the sex offender population "never recommits a sex crime" is a lie... Sex Offender Updates would like to draw your attention a section of our website dedicated to exposing this lie. We call it the "Recidivist Spotlight" and we feature stories about sex offenders who were re-arrested or convicted of a sex crime more than three years after they were released from prison for their previous offense. We also have a photo album on our Facebook page dedicated to repeat offenders. Each one of these are specific examples of sex offenders whom Janice Bellucci says "never recommitted" a sex crime, even though we have it in black and white proving to you that she is wrong.​"

They obviously don't understand recidivism rates, but it is interesting how they think a FB album is going to prove numerous state and federal studies wrong. SOU has engaged i the "Anecdotal" fallacy.

Without citing any evidence of most of their claims, they tried in vain to dispel the low recidivism rates:

Here are the key points to remember whenever you hear anyone suggest that sex offenders re-offend at a rate of 5%:


They are still promoting other lies like how we are all somehow connected to NAMBLA (the same BS spewed by other dubious online groups like Pee-J/ AZU): 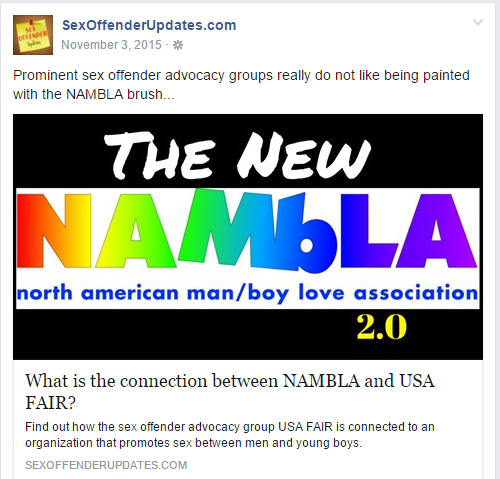 Of course, they even admit the following:

"Unfortunately, I have yet to see any mainstream media piece connect the dots and highlight the fact that the RSOL organization was co-founded by an admitted pederast who also helped found NAMBLA several decades ago."

Gee, do you think it had to do with the fact that the only source for this outlandish claim is OTHER DUBIOUS WEBSITES? Perhaps it is because for all the flaws of the mainstream media, many reporters at least attempt to use VALID references and not junk found on the internet. If you believe everything you read online, next thing you'll know, you're off to join the Reptile Jesus cult. At this point, i'm waiting for the SOU FB page to be filled with "like and share with 10 people or the ghost of Megan Kanka will kill you" or whatever stupid shit FB users do these days.

It is obvious the people at SOU can't be trusted to tell the truth about ANYTHING.

By the way, if they're butthurt over Janice Bellucci's comparison between US sex offender laws and Nazi Germany (another thing I've discussed a decade ago, I might add), then I bet they're beside themselves over THIS ARTICLE by the Washington Post.

I guess they'll be looking for a new Mailboxes Etc. to try to scam funds from the Facebook sheeple in the near future.
Posted by oncefallendotcom at 1/16/2016 10:19:00 PM No comments:

Recently, the LA Times ran an article entitled, "California’s laws test whether sexual predators can ever be rehabilitated," which covers the story of the release of the man who has been given a scary name by the media, the 'Pillowcase Rapist." Now, I remember after my appearance on the Dr. Drew show in April 2014 on this subject, even some within the cause questioned why I would "defend" such a man. I don't defend this man's past; my argument was since this man was deemed worthy of release by the civil commitment system, I want this registrant to have a fair opportunity to become a productive member of society. Whether you like the idea of such a high profile candidate to be free, this is the reality.

Now, almost two years later, the man I had to defend on the Dr. Drew show is making headlines by virtue of his label. He was released into a home in July 2014, and has remained there ever since. Within a month, neighbors established a round-the-clock protest, harassing the man, shouting obscenities, and leaving effigies around the home. This is all petty and nonsensical behavior more suited from FlorIDIOTS rather than folks from the land of the "happy cows."

And so, the vigilante thugs have eld a non-stop harassment campaign for over a year now:

There is something deeply disturbing about all this kind of behavior. According to the LA Times piece, vigilantes have--


Of course, while it makes all these self-righteous pricks feel good, it may make their target more likely to reoffend. “To have people outside your house every single day, screaming the most obscene, threatening, violent things at you, would wear on anybody’s soul,” said Christopher Yuen, a deputy public defender in Santa Clara County. If this man is truly "likely to reoffend," then I imagine the constant harassment isn't going to help this guy stay on the straight and narrow.

To me, this is just another reason why sex offender laws should be largely repealed. Every person, no matter the case that landed him or her in jail, should have a fair chance upon release to be a productive member of society. And yes, this guy is a repeat offender so it is harder to defend. But at the same time, we have a judicial process that determined he was ready to be released, and I want this guy to succeed rather than fail. Do you?
Posted by oncefallendotcom at 1/15/2016 11:59:00 AM No comments: