It seems that Ohio has had more than its fair share of idiotic vigilante scumbag groups over the years and now another group of wannabe have popped up online. "Bikers Against Abused and Neglected Children" sounds like they're against children (not surprising they didn't put much thought into the name) is just another group of online trolls that like to cosplay as bikers on weekends and act tough. On the surface, they run a 501(c)3 that apparently raises money through gambling and alcohol (promoting vices that attract hardened criminals, thus keeping in line with the pseudo-biker theme) to raise money for some kid's toys and "legal expenses for victims." (I don't know what that's supposed to mean, seeing as how crime victims don't generally have any legal expenses unless they mean they are helping to sue people, but even then, that is questionable.) They're running their "charity" out of their own home at 9413 State Route 99 N, Monroeville, Ohio 44847.

Obviously, if that was all there was to the story, then I wouldn't be writing this article. They started an online attack as response to my appearance on the Ashleigh Banfield show. They spammed the Facebook page run on my behalf then proceeded to make a few veiled threats. After dealing with other vigilante groups over the years, it is easy to see a pattern develop.

First, they start by finding whatever bad info they can find on you, never considering it was also written by losers like themselves who don't necessarily care about being accurate: 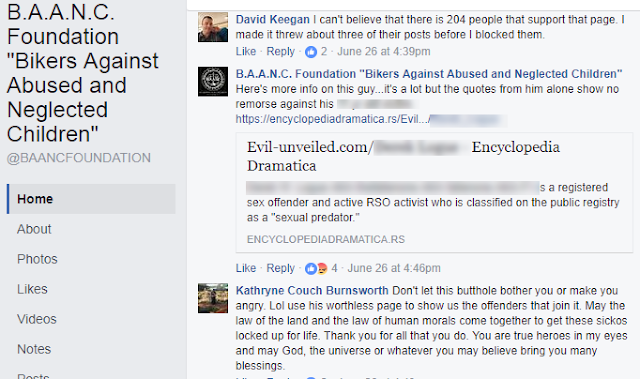 Yeah, anyone who quotes Encyclopedia Dramatica [a garbage satirical site run by Anonymous rejects] as a valid resource is automatically dumber than a Trump voter. [Many BAANC members/ supporters LIKE THIS ONE are Trumptards. That's no surprise.] Anyways, continuing with the playbook, the next step is to target anyone that is a member of the page:

Again, they act as if we've never dealt with a vigilante group before. Newsflash, folks. Unlike my main website, this blog and my social media pages are run by more than one person. As much as these folks hate it, I don't just sit at home 24/7. While I and the editors at my FB page were out enjoying life, the losers at BAANC spent all day spamming the page. Of course, those remarks were promptly deleted and they took to crying over it. Too bad.

The most important point is that they took to engaging on doxxing, a threatening behavior online:

There is no need to specifically mention one's workplace without a reason, and that reason is obviously to target people with harassing calls to one's workplace. Since BAANC is slow in the head, I have taken the liberty of highlighting where the threatening action was made:

It seems this behavior has not been isolated, either. The following was sent to me by one of BAANC's victims: 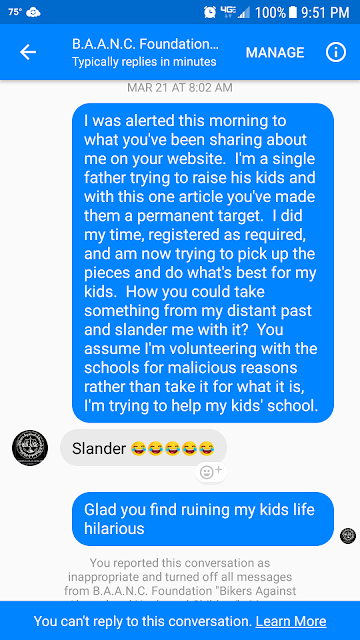 And while BAANC claims they are a non-violent group, Their posts say otherwise:

It seems they have even lowered themselves to lame impersonation too: 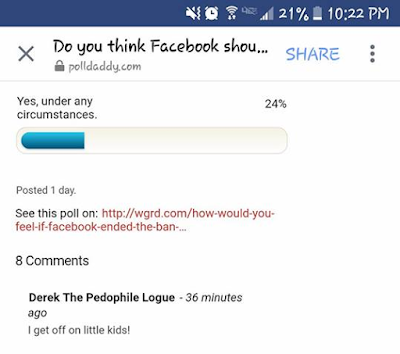 Seriously? That's kids stuff! Their tactics are pretty lame, quite frankly. After all, there's THIS clown who actually thinks voting 10 times on a media poll will somehow change the US Supreme Court's opinion on Packingham v NC, a UNANIMOUS decision guaranteeing a registrant's right to use Facebook: 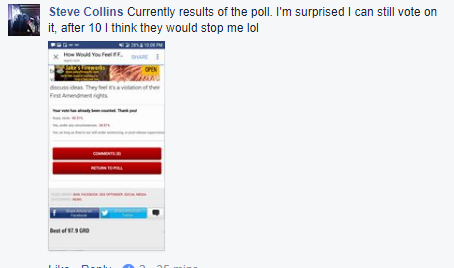 I should mention they even tagged a guy who actually believes in the universally debunked Satanic Panic stuff, but I think I've already shown sufficient evidence to prove they are a bunch of phonies.

Be wary of groups like these. Immediately report these fuckers to the police every time they engage in harassment.

Names associated with this vigilante scumbag group. They claim "12k members" but in reality, only a handful of these fucktards actually are involved with this pseudo-biker gang. I guess I should add an addendum here and point out that because these folks all came at the same time to bombard the FB page wit various crude, vulgar, even threatening remarks, this would lead any reasonable person to assume everyone on the list is connected to this online vigilante group. Either way, the following names were all blocked from further harassing communications on FB:

Here's a screenshot so a certain complainer who is claiming she wasn't a party to this coordinated attack. Maybe the complainer should pick a better group to follow in the future and be more mindful of her online behavior before attacking others:

As usual deplorables/vigilantes have closet issues.

No doubt they're massively butthurt over being exposed. I've already had 200 reads in a few hours so obviously they spread it among their entire fanbase. But whining and threatening me won't make me go away. You' think after a decade of this, the vigilante groups would realize I don't scare easily.

Sara, you were added to the list because you were among the members of BAANC who spammed the Once Fallen business page at FB yesterday with disgusting and threatening comments. So go ahead and call your lawyers, because they will tell you I haven't said anything that wasn't true. Here's an idea, don't harass me or others with my label online and you won't be exposed. Your past doesn't excuse your current actions.

Update a new Alabama vigilante murder takes place because the accused murderer says that he was killing a child rapist. This is the biggest vigilante murder in Alabama since the Jay Maynor incident

Update Creep Catchers face more violations from Privacy rights and in one case theres allegations of Brutality in the UK.


A suspected child groomer was punched in the head in front of cheering onlookers after he was ‘trapped’ in a sting operation.
Video shows how the situation deteriorated when he was confronted by a so-called paedophile hunter who had been posing as a 13-year-old girl.
The anonymous vigilante – from the group ‘Creep Catchers UK’ – was unable to restrain the stocky suspect and started shouting at people in the street: ‘Call the police. He’s a paedophile.’
Members of the public taunted and ‘spat at’ the married dad and one hit him in the face, while police took nearly half an hour to respond.
The man tried to flee when he was accused of sending pictures of his penis to an adult decoy – posing as an underage girl – and arranging to meet ‘her’ for sex.

As a crowd of bystanders gathered to detain him in Sheffield city centre on July 22, a man appeared to creep up from behind and thumped him in the face, knocking his sunglasses off.
One onlooker called for him to be ‘hung, drawn and quartered’, while another raged: ‘He wants f***ing slaughtering.’

Here is a crazy update here.