This is Brian Oei, who decided to take it upon himself to get arrested for harassing a registrant. Granted, this is minor compared to vigilante reports I've seen here, but since he decided he wants his 15 minutes of fame, he'll get 15 minutes of shame on this blog. Enjoy. Not sure which person in the pic is Brian, is it the one on the left?

TRUMBULL -- A local man, who doesn't want a sex offender living in his neighborhood, was arrested after police said he taunted a twice-convicted sex offender outside the offender's home.
Bryan Oei, 19, of Primrose Drive, was charged with trespassing and disorderly conduct. He was released after posting $500 bond pending arraignment in Superior Court on March 22.
According to police, on Wednesday Joseph Kallay, who has twice been convicted of sex-related charges and is on the Connecticut Sex Offender Registry, complained that he was being taunted by Oei, who he did not know.
Police said Kallay told them he had received a telephone call from Oei who said he knew Kallay was a convicted sex offender and referred to Kallay as being a "Rape O."
Police continued that sometime later Kallay got a knock on his door and when he opened he was confronted by Oei who began taking photographs of him. When Kallay told Oei to leave, Oei responded," What if I don't, are you going to rape me?" police said.
Kallay then called police.
Oei was arrested a short distance from Kallay's home.


It wasn't enough this punk got caught doing this, he bragged about his crime on his TWITTER account: 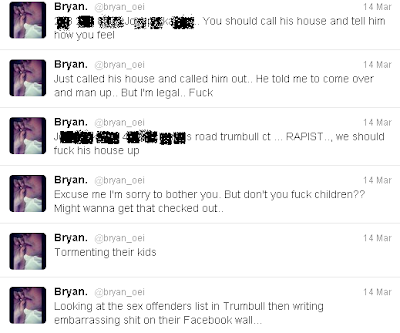 Looking at this guy's twitter account, it is obvious he's mentally disturbed. Maybe it is just the weed.

None of this will men anything a couple of months from now when you are paying for your crimes. 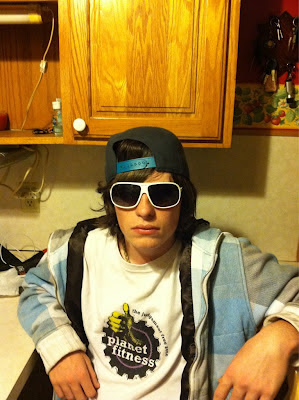 This article originally appeared in the SHIITAKE WEEKLY blog.
Posted by oncefallendotcom at 3/20/2012 06:34:00 PM