The Associated Press refuses to publish an "alleged" killer's name because she used the abuse excuse, but I'm not the AP. 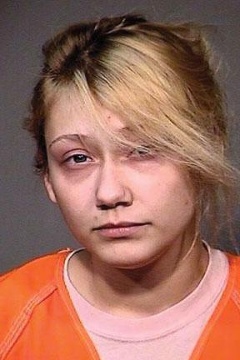 The Associate Press wouldn't publish the name or the mugshot of Kayleene Grenier because she claims she was sexually assaulted by the person she helped murder. That's a load of horseshit! Thankfully, the other media outlets haven't followed the same policy, so here is the abuse excuse/ 'alleged" murdered Kayleene Greniger.

A Minnesota woman was charged Thursday with hiding a machete her boyfriend allegedly used to decapitate a man she said raped her.

Prosecutors charged the 22-year-old woman with being an accomplice to second-degree murder after the fact and with third-degree assault, both felonies. Her bail was set at $2 million without conditions, the same as her boyfriend's.

She's accused of tying up and beating David Haiman, breaking his nose, after he arrived at the Grand Rapids apartment she shared with Joseph Thoresen, 35. She untied him, then Thoresen punched him repeatedly, the complaint said.

Prosecutors allege Thoresen later ambushed Haiman along a road near Ball Club and used a machete to decapitate the 20-year-old Hibbing man. Authorities found Haiman's torso and head Sunday. The woman allegedly hid the machete in the couple's apartment.

According to the complaint in Itasca County, the woman had told Thoresen that Haiman had sexually assaulted her.

Thoresen is charged with murder. His attorney, Darla Nubson, declined to comment.

"We are looking into that," Weller said.

Both Thoresen and his girlfriend remained in jail Thursday. They are due in court Tuesday.

Here is a non-AP article that had no problem publishing Kayleene's name.

On Thursday morning, Kayleene Greniger, 22 of Grand Rapids appeared in Itasca County District Court. She is charged with one count of Accomplice after the Fact to Murder in the Second Degree and one count of Assault in the Third Degree.


Im Sorry this Minnesota incident is starting to sound too much like the JP Orlewicz beheading from a decade ago, the story starts out as ISIS or Al-Qaeda sounding but the details end up more insane because you expected to end up with a jihad stereotype. it ends up being about White Trash who beheads somebody they call rapist for mob hit reasons or for drug deal reasons over meth.

Damn This got more insane Now the Brother of one of the murderers has been accused of Witness Tampering and Witness Intimidation. They are retaliating against a witness over the beheading case.


here is an update on the David Haiman case.

http://www.northlandsnewscenter.com/news/crime/Hearing-will-be-continued-for-third-suspect-in--394354121.html Update the third KIller for the David Haiman Murder is

Triston Corwin, 19, of Grand Rapids, Minn., was charged in July with three felony counts and two misdemeanors involving theft of a motor vehicle, driving while impaired and running from police.

Corwin's charges are in connection to the murder of David Haiman. Haiman's body was found in Deer River, Minn., earlier this summer.
On Tuesday, Corwin had a hearing in court, but it will be continued on November 21st.
The court says he remains released on his own recognizance. The court adds that he is subject to drug and alcohol restrictions and spot checks pending his future court appearance.

Update a third guy has pleaded guilty to the David Haiman Murder for witness tampering.


Update for the David Haiman Muder

GRAND RAPIDS — A contested hearing has been set for the Grand Rapids man charged in connection with the murder of a Hibbing man in June.

Joseph Christen Thoresen, 35, appeared before Itasca County Judge Lois Lang Tuesday afternoon for a hearing in which his attorneys requested a contested hearing be set to challenge some of the evidence against Thoresen.

Thoresen had previously been charged with one count of felony second degree murder and Greniger had previously been charged with one felony count of felony accomplice after the fact to second degree murder and felony third degree assault. The two were charged in connection with the death of David Haiman, whose remains were found near Ball Club the morning of June 26.

During Tuesday’s hearing, Thoresen’s defense attorney, Steve Bergeson, told the court they were looking to challenge some of the evidence against his client, and that they were also looking for clarification on the disclosure rules pertaining to the transcript of the grand jury proceedings.

Lang had previously ruled that only the attorneys for both the state and defense could have access to the transcript, but the defense attorneys could share sections with their client as long as they kept the transcript in their possession at all times.

Bergeson said the transcript was more than 800 pages and they wanted to be able to leave portions of the transcript with Thoresen for his review. Bergeson later pointed out they feel “this is evidence.”

GRAND RAPIDS, MN (MNN) - A Grand Rapids woman on Friday pleaded guilty to second-degree murder in the beating, stabbing and beheading of a Hibbing man last June and agreed to testify against another defendant in the case.

Prosecutors say Haiman was assaulted by both defendants and then executed by Thoresen in retaliation for an alleged sexual assault of Greniger.

She faces up to 30 years in prison. Thoreson awaits trial and, if convicted faces a mandatory sentence of life in prison.