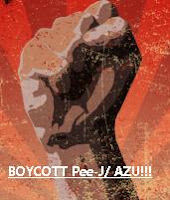 AZU and their silly boycotts. The problem with the double boycotts of Amazon and Disney/ ABC's 20/20 TV show is their line of reasoning.

AZU has been boycotting them for a while but they were hoping to cash in over the recent news report of a so-called pedophile book on the internet. aside from the fact the story had a lot of holes in it, and the fact Amazon actually pulled the e-book after complaints were filed, AZU has kept this silly boycott idea at the top of their website. There's one little problem with the news story that prompted the latest controversy. Amazon has a feature that allows anyone to write and publish a book. In fact, I have written my own e-Book, available on Amazon. Within 72 hours, your e-Book will be available for the world to see... and buy. No one reads a book in 72 hours, much less the hundreds of thousands of e-Books Amazon has available in it's Kindle store. It is no different in function than Google's Blogspot, which hosts both AZU's blog and this anti-AZU blog. Amazon essentially offers a service that allows people to publish electronically for free (Amazon gets a cut of all book sales, of course). It is silly to expect Amazon.com to play censor to everyone's whims. Hell, if I had my way, I'd have ever copy of Anna Salter's crappy book burned but I doubt a boycott would achieve anything.

First off, the original beef was with John Stossel, who now works with FOX. The original beef was because John Stossel aired a show in which former PJ/AZU troll Barbara "Petra Luna" Ochoa made a complete drunken ass of herself on TV. They created a blog to attack Disney, which owns ABC, in retaliation. To justify their attacks, they post any arrests of Disney workers for any sex crimes, like THIS ONE, a worker who allegedly molested a girl while wearing a Tigger costume. There is just one little detail they missed. THE MAN WAS ACQUITTED ON ALL CHARGES!

Absolute Zero United never let things like THE TRUTH get in the way of their slanderous campaigns. They will not be missed.
Posted by oncefallendotcom at 12/08/2010 11:47:00 AM