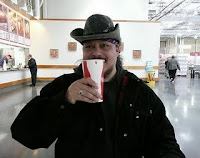 Rob Taylor has apparently been adding something to that cup that's warping his mind. His latest insane rant has come in the form of a couple of direct emails. He threw a hissy fit because I complained to a website owner over an article where Taylor still insists on referring to me as a child rapist and pedophile. The problem is I was never convicted of rape, nor am I clinically diagnosed with pedophilia. That is what happens when you have elementary school dropouts writing insane rants on private blogs like Red-Alerts. Apparently freedom to Robbie boy means freedom to slander:

What I found odd was Rob Taylor is spewing venom about Clay Keys. Did he lose the memo that Clay Keys is now a bona fide menber of AZU? You're fine and dandy with Clay Keys playing cheerleader on AZU these days. The proof is in the pudding, or rather, the website: 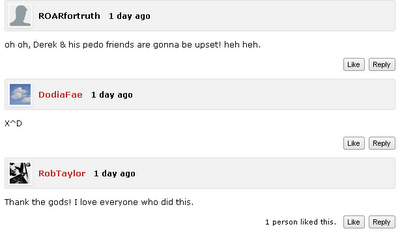 Rob Taylor has either a serious case of denial or some really bad eyesight. However, for all the crap he said about Clay Keys in a private email but he's awfully mum about it out in public. It sounds a like like hypocrisy to me! Taylor is crying because I'm costing him work? Also bullshit. I didn't know harassment and slander was a full time job! You'd think of Robbie wanted to tell T-Sand to "fuck off," he'd do it himself.

UPDATE: The News Real Blog finally removed Taylor's trashy article. It certainly wasn't because of David Swindle. I went a little higher up on the corporate totem pole to find someone with a little common sense. If Robbie would keep my name out of his mouth, there wouldn't be a problem.
Posted by oncefallendotcom at 12/19/2010 06:50:00 PM

ROFL... Thanks for posting his email. Little Robbie is quite the comedian and I never tire of his paranoid rantings.

Robbie is a big hypocrite for telling me to relay a message to TSand knowing full well TSand is posting there.

I'm still waiting for Taylor's lawsuit. He's wasting his time and money, plus he'd merely end up giving me his personal info, which will become public record, and his enemies will find it. I call his bluff on both counts.

Taylor-trash claims he has a degree in religion. I didn't know they still put prizes in Cracker Jack boxes!