Shoalanda Speaks is more than just a "little racist"

Shoalanda Spews, er, "Speaks," is your typical idiotic independent crime blog created by some crazy soccer mom with too much time on her hands, but considering how her stupidity put my ex-fiancee's life in danger a couple years back, any time I can slam that retarded cunt on my blog, I will. So every once in a blue moon I read her blog. She obviously can't leave me name off her shitty blog so i try to even the odds. Speaking of odd, I found an interesting tirade from the bimbo on her blog recently: 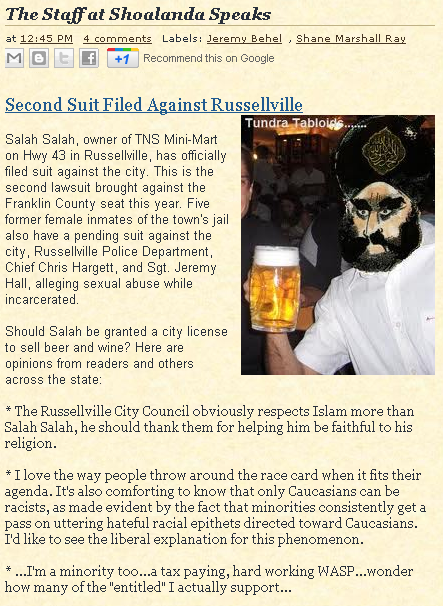 I love how she uses the term WASP, a term favored by white supremacists and neo-nazi skinheads everywhere (On a side note, I wonder if Stitches 77 has found a new Skinhead website to attend lately). It is funny that she mocks a similar accusation of her racist remarks then denies being racist: 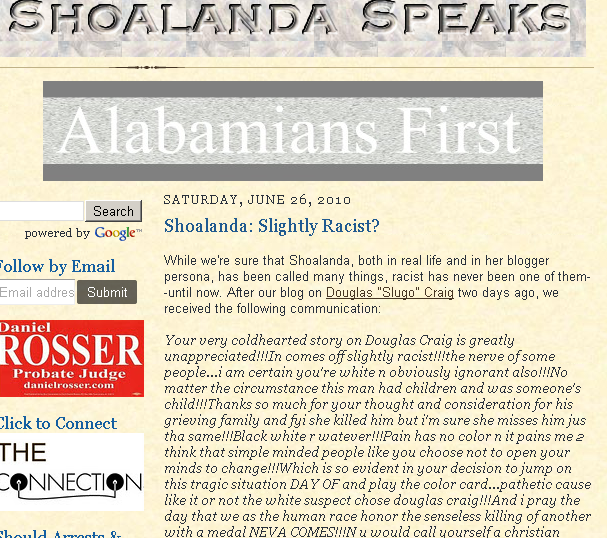 Whoever sent Trollanda that letter deserves a medal.

Any time you write a sentence beginning with this--Again the perfidies of the Muslim "so-called" religion -- or this -- Its ok with me if Muslims drink beer. Mormons too for that matter. But they can get it at the Wavaho like the rest of us. They don't need special privileges like the Mexicans.-- that comes of as white supremacy. I've discussed this before, but why is it so many people who run independent blogs like Shoalanda or AZU are also found on racist websites or expressing many types of hatred in other ways? Many are racist, homophobic, and anti-anyone who is not exactly like them. That is why they like to refer to themselves as "antis."

The anti-paedos don't have an interest in the well-being of children. They are interested in expressing hate. Paedos are just easy targets for them because no one wants to defend us, whether we abide by the law or not, whether we abuse or engage in consensual relationships or not. We are quite defenseless. If society was still generally racist you can bet your ass they'd have posts on their blogs about the evil "niggers". Bunch of fucking assholes.

You don't see a lot of minorities in these groups for a reason.