Report Laurel Stafford to the Oregon and Indiana State Police

ADDENDUM-- LAST NIGHT SHE DELETED HER FACEBOOK PAGE. IF ANYONE HAS ANY FURTHER INFO ON THIS "LAUREL STAFFORD" PERSON, PLEASE CONTACT ME.

Rarely do I make a real big deal over a vigilante scumbag but I will have to make an exception today. Friends of mine forwarded this information to me and I feel it is important this woman gets reported to the proper authorities immediately. 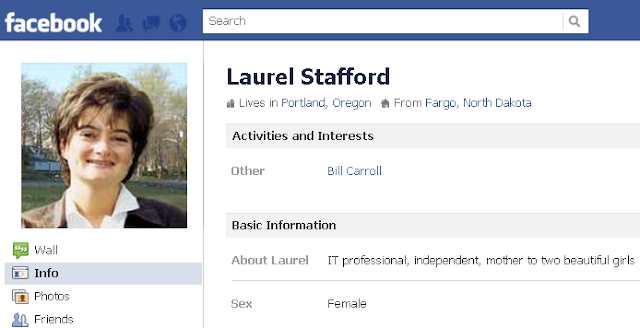 This is Laurel Stafford from Portland, OR. She has been gathering info on Registrants and harassing them, forcing them out of their homes and places of employment. Abuse of the registry is illegal so she should be reported immediately to the proper authorities.

On Thursday, Feb. 2, 2012, KATU of Portland, OR featured a fear-mongering article called "The Sex Offender Next Door," your typical scare article attacking Oregon's policy of only listing "Tier 3/ High Risk" registrants. The reporter, Anna Canzano, apparently added a Facebook page to get feedback on her unethical article. She's a real piece of work but that's a story for a different day. So anyways, Laurel adds the following comment to this Facebook Page.

It is obvious she is breaking Oregon law by moving to have two registrants evicted from her neighborhood. This is clearly explained on the Oregon Sex Offender Registry website:

This woman should be prosecuted for her actions. Below is the Oregon State Police contact info:

This is not Laurel Stafford's only offense. Apparently Laurel also sought to get a registrant in Ft. Wayne Indiana fired. Don't know why an Oregon resident is working to fire some guy 2000 miles away, but she did it nonetheless:

She now violated anti-harassment laws in two states. Indiana's sex offender registry also has a disclaimer against abusing the registry. Here is the contact info for the Indiana Sheriff's Association:

When someone blatantly abuses the public registry, that person needs to be prosecuted. She's harassed and caused harm to three people already, and she must be reported to the proper authorities.

The wonderful Ms. Stafford and her friend don't care about the collateral damage they cause the wives, children, mothers, girlfriends, grandmothers and others in the registrant support system who are harassed, beaten, threatened, have signs placed in their yards, flyers distributed around the neighborhood, are asked to leave their church or organizations. These two thoughtless and self-empowered women should think before they do thing like this to folks who did nothing to deserve it.

Apparently this Laurel chick got the info from a website called "Angry White Boy."

It is even possible the owner of this site, Dan Turkette, may be posing as Laurel. I wouldn't doubt it.

My god what a cunt. People who have served their time need to be able to reintegrate into society or the chance they will re-offend (if they actually did anything bad) is so much higher.

This is what happens when people have no lives. I truly feel bad for her daughters.

This is what happen to people (Laurel Stafford) when they have no life and only hate and if she can keep a man I fill so sorry for him. there is only one place that a person can go like her and thats HELL there she will truely meet some bad people thats shes been looking for. I have family members that have to Register and it not good for them at all they just want to get on with life, it's just a witch hunt and I hope that she get what shes looking for...