Not again! Vigilante thug gets only 11 months for vehicular assault 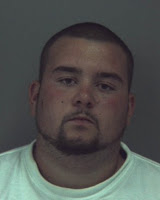 Yet another vigilante scumbag gets off with little time served. This person deserved a lot longer than 11 months for attempted vehicular homicide. 'm sure the losers at Absolute Zero United will be cheering this one.

HOPEWELL _ A 20-year-old man accused of trying to run over a convicted sex offender as he fled on a moped entered a plea today that calls for no additional jail time, an agreement that was angrily denounced by the victim.


Daniel R. Narron of Hopewell pleaded guilty in Hopewell Circuit Court to attempted unlawful wounding, a felony, and to disorderly conduct and hit and run, both misdemeanors.
Approving the terms of the agreement, Judge Samuel E. Campbell sentenced Narron to five years for the felony and 12 months for each misdemeanor charge, but the judge suspended all of the jail time. Narron, who has spent about 11 months in jail, was expected to be released today.
Also today, three co-defendants entered pleas to misdemeanor charges of disorderly conduct and failure to report an accident. Each was convicted and told the charges would be dismissed after one year if the defendants remain on good behavior.
Those defendants are Damon J. Silvestro of Colonial Heights and Eric B. Harris and Thomas W. McCall, both of Hopewell.
After today’s proceedings, the victim in the case, Rudolph Ellis, 54, criticized the plea agreement for Narron, saying, “I was running for my life. That young man tried to kill me. This whole thing is a joke.”
Ellis also excoriated the Hopewell Police Department, saying they refused to pursue an investigation and that officers had harassed him.
Hopewell Commonwealth’s Attorney Rick Newman said after the hearing that he turned over the investigation to Virginia State Police because “the police department didn’t do anything.”
Asked if he knew why the police took no action, Newman said, “I have no idea.”
The incident occurred Oct. 16, 2010. Since then, Hopewell has hired a new police chief, John Keohane, a former high-ranking Richmond police official. The former chief, Steven D. Martin, had a contentious relationship with Newman.
A phone message left at the police department today was not immediately returned.
Ellis has testified that he was confronted at a convenience store and that, after cursing back, he left on his moped and soon found himself being chased by Narron and his three companions.
At one point, Ellis darted through some trees and behind a house in an effort to lose them, but his pursuers didn't give up, he said. As Ellis darted across Hill Avenue to get to a friend's house, he said, his moped was struck from behind and he fell to the ground uninjured. The suspects then drove away, he said.
Narron’s attorney, James Maloney, told the judge today that Narron had only been trying to scare Ellis and had not meant to strike him. He said the moped had shot out from behind a house in front of Narron’s vehicle.
“He has never been in trouble before this,” Maloney said of his client.
The attorney added that the incident represents a momentary, alcohol-fueled lapse in judgment and that Narron has taken full responsibility for his actions.
Posted by oncefallendotcom at 10/18/2011 03:58:00 PM